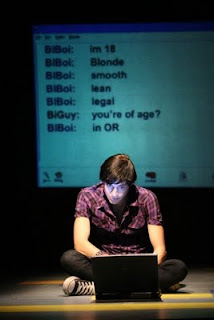 Teenage angst has been fodder for authors for centuries, and geeky teenagers have been well served in films such as 'Rebel Without a Cause' and 'The Breakfast Club.'

Now comes playwright Stephen Karam and his unlikely protagonists - Diwata (Lindsay Carter), Howie (Benjamin T. Ismail) and Solomon (Matthew Rogozinski) - who meet through the Internet and are drawn together by a shameful secret.

And more than a bit of blackmail.

Karam's 'Speech and Debate' is being presented by Capital Stage, at the Old Sacramento venue on the Delta King.

The inspiration for this play was a 2004 sex scandal, in which the then-mayor of Spokane was caught trolling in an online gay chatroom with an 18-year-old male.

The play's fourth character is the multi-talented, under-utilized Katie Rubin, who appears as a teacher in the first act and a reporter in the second. This marks Rubin's first appearance with Capital Stage, and one hopes it isn't her last.

Director Stephanie Gularte has created an amazing piece, wherein the twentysomething actors adopt all the quirks of adolescents, with all of them nailing their respective performances. Diwata and Howie have more quirks than the more repressed Solomon, and each sets the proper mood during early scenes.

Ismail's Howie, an 18-year-old openly gay transfer student, chats on the telephone with Solomon, whom he has never met, but who has read an Internet chat between Howie and an older man. Ismail's body language - twisting and turning into uncomfortable positions, pacing nervously, twisting his hair, his face sporting that bored look so many teenagers get - is spot-on.

Diwata's first scene comes as she sits in front of her laptop, recording a video blog entry. She's obviously a quirky, star-struck, would-be actress who overestimates her talent; she still smarts over not having been chosen for the lead in a production of 'The Crucible.' She blogs a diatribe against her drama teacher.

Solomon is angry that his school newspaper won't let him write an article about abortion, because it's too controversial.

'Half of our class is having real-life, actual sex,' he rails, 'and they're talking to us about our 'bathing suit areas.' Why don't they talk about stuff we actually want to know about?'

The three are brought together in the speech and debate club, which Solomon and Howie join only because they're blackmailed into it by Diwata, who threatens to expose each boy's dark secret. Diwata uses the 'club' - these three are its only members - as an outlet for her longing for the spotlight.

But being involved in the speech and debate club also is a means of allowing each student to get what he or she wants.

For Solomon, who fancies himself an investigative reporter, this will grant him access to a paper that will print his story on the sex scandal involving Howie and a teacher. Howie expects to persuade the others to support his proposed gay/straight student alliance.

Diwata, for her part, gets the spotlight hitherto denied her, when she produces her own musical version of 'The Crucible' (an excerpt of which definitely is one of this play's high points).

The camaraderie all three find, during their offbeat interactions, changes their lives: They become more full.

Sadly, the question left unanswered concerns whether the trolling high school teacher ever gets exposed, or receives any sort of punishment. That would, of course, move this story out of the realm of comedy and more toward drama, but it's nonetheless a missing piece of the picture.

'Speech and Debate' is a fresh, edgy comedy, and it should appeal to audience members of all ages.
Posted by Bev Sykes at 12:35 PM