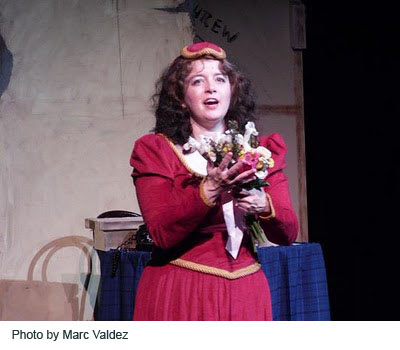 Marguerite Morris has a role to really sink her teeth into.

Her Lilli Vanessi/Katharine in the Davis Musical Theatre Company's production of 'Kiss Me Kate,' directed by Rand Martin, may be one of the best roles I've seen her embrace.

This is another strong showing by DMTC, boasting an outstanding cast, good tones from the orchestra, fun period apparel by costumer Jean Henderson, and Martin's eye-catching choreography.

'Kiss Me Kate' is the story of a touring Shakespeare Company that's presenting Shakespeare's 'Taming of the Shrew.' Despite their acrimonious divorce, a spark obviously still flares between Lilli and ex-husband Fred (Martin Lehman), which erupts into a full-fledged on-stage conflagration in the middle of Act 1, and threatens to close the show.

Morris and Lehman are superb. Their feelings for each other, both positive and negative, sizzle on stage. Both Lilli and her character, Katharine, have fiery temperaments; the actress gives this full rein in her rendition of 'I Hate Men.'

Lehman is a take-charge guy with an ex-wife he obviously still loves, and a girl on the side he's trying to woo, yet his sensitivity spills out in his 'So in Love.' As Petruchio, his 'Where Is the Life that Once I led?' is outstanding.

Mariana Seda is irresistible as Lois Lane, playing the role of Bianca in the play within the play. She's in love with Bill (Chris Petersen), but is a gold-digger who can't keep away from other men; despite this, as she tells Bill, she's 'Always True to You (in My Fashion).'

Petersen, a man in love, also has a gambling problem. (This problem, merely a ruse to add two additional characters to the plot, never is taken all that seriously.)

Steve Isaacson plays Gen. Harrison Howell, Lilli's fiancé, a domineering military man who is more Petruchio than Petruchio himself. I sometimes forget what a really good singing voice Isaacson has, and this show is a good reminder.

Stealing the show, in roles designed to steal the show, are Kyle Hadley and Giorgio Selvaggio, known as 'Gangster 1' and 'Gangster 2': thugs trying to collect a debt. Both are hilarious and their 'Brush Up Your Shakespeare' stops the show for several well-deserved encores.

Patrick Van plays Paul, a role that has no function in either the story of Fred and Lilli or Katharine and Petruchio, but provides an excuse for a great dance number, 'Too Darn Hot.' This opens Act 2, and Van truly sizzles. Despite having spent the week before opening night in a hospital, Van showed no hint of any physical ailment and was a standout in all his scenes.

Mary Young, as Hattie, is paired with Van for both of his two big numbers. Young, whose performances span almost the complete history of DMTC, shows that she still has the energy to keep up with the company's younger members.

Martin's set design is simple and utilitarian, although some of the wagons could have been anchored a bit better, as one behaved like a snowboard when a character leaped up on it.

The lighting design is by Greg Wershing, who started designing here in Davis in his teens, went on to travel the world with the likes of Neil Diamond, Madonna and Garth Brooks, and now has returned to Davis; his children have joined DMTC's Young People's Theatre division. DMTC is fortunate to have the talented Wershing back in their ranks.

'Kiss Me Kate' has lots of references that date the piece, and no woman is ever happy when Katharine subjugates herself to Petruchio; all that said, this production offers patrons a rollicking good time.
Posted by Bev Sykes at 3:14 PM