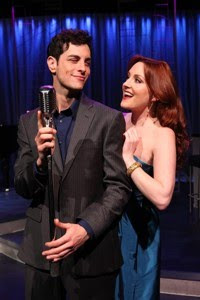 The 2009 Citizens Who Care concert, right here in Davis, focused on Sinatra's work.

And through May 9, California Musical Theatre's Continental Cabaret has mounted its own tribute to Ol' Blue Eyes, with a show called “My Way” (of course).

Sinatra always was — and continues to be — comfort food for the masses. Anybody who has ever quietly hummed “doo-be-doo-be-doo” will enjoy watching the four talented singers who trip through 58 selections from the Sinatra songbook. You may not know every song throughout the evening, but you'll certainly recognize most of them.

And you'll be invited to sing along with several, as well.

The setting is a high-class saloon, with blue lights, a grand piano — at which sits musical director Chris Schlagel — and a bar from which drinks are poured endlessly. The performers glide around the stage, moving from song to song: sometimes only bits and pieces of a song.

Some information is provided about Sinatra's career, but anyone who heard Steve Peithman's narration for last year's Citizens Who Care show will be disappointed by the lack of depth.

But the focus is on the music; in that respect, this cabaret performance does not disappoint.

Michael G. Hawkins, a veteran Music Circus performer, is the silver fox: the savvy crooner with a wink for the ladies, an ever-so-slightly off-color remark, a tilt of the martini and a smooth rendition of a Sinatra tune.

(To their credit, the singers do not use Sinatra arrangements, instead making each song his or her own.)

Young Jeffrey Christopher Todd, fresh from roles in shows such as “Rocky Horror Picture Show,” “Grease” and “Altar Boyz,” bears an uncanny resemblance to the very young Sinatra, with the tumbling curls and chiseled cheek bones. Todd has all the enthusiasm that Sinatra himself must have felt, as his star was beginning to rise.

The gentlemen are complemented by two more than competent females. Karole Foreman — who made her Sacramento debut last year, in the Music Circus production of “Thoroughly Modern Millie” — is effervescent and has a permanent twinkle in her eye. She's also a treat for the ears.

Laura Dickinson gives a sultry, smoky voice to songs such as “Where or When,” and seems to fit quite nicely into the slot of Sinatra “dames.”

The section of quotes about the “dames” in Sinatra's life may be somewhat offensive to 21st century women, but is explained with a quick “That's how it was in Sinatra's day.” He was a “guy,” and “dames” never could break into the inner circle ... although they might visit for entertainment purposes.

“You only live once,” Sinatra said, “and the way I live, once is enough.”

Apparently Americans aren't yet ready to take him at his word. Sinatra is alive and well, and still entertaining audiences at Sacramento's Cosmopolitan Cabaret.