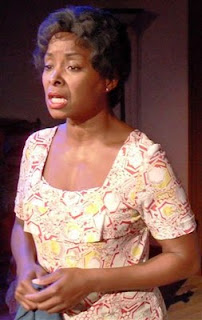 Frank Higgins' play, directed here by Michael Laun, is very loosely based on the story of Lead Belly (Huddie William Ledbetter), the iconic American folk and blues musician who was notable for his strong vocals, his virtuosity on the 12-string guitar and the songbook of folk standards he introduced.

Ledbetter was 'discovered' at Angola State Prison by musicologists John Lomax and his son, Alan. They recorded hundreds of Lead Belly's songs for the Library of Congress, and may have been instrumental in the singer's early release from prison.

Higgins has made this a two-woman play: Pearl and the researcher, Susannah (Lynn Baker), who sees this singer as her ticket to a good job in a male-dominated profession.

Susannah and Pearl meet at a women's prison in Texas, where the latter is serving time for mutilating an abusive boyfriend.

It's a wary dance from the beginning, as the two women engage with each other. Each wants something from the other, and both are trying to find a way to get that thing.

Susannah obviously wants Pearl's songs as a means to advance her career. While working in Appalachia, Susannah previously has uncovered songs traceable back to Ireland, only to have the credit usurped by her supervisor. By attempting to find someone who has learned the songs of the slaves - and, better still, songs that 'predate slave times' - she hopes to take her rightful place in the halls of academia.

Pearl can't see the value of her songs, but she hasn't heard from her 22-year-old daughter in weeks, and is afraid something has happened to her. Pearl, desperate for information about the girl, decides that maybe Susannah will help find her daughter in exchange for some of the songs she knows.

This give-and-take goes on throughout the first act, while an uneasy friendship - or something that approximates it - develops between the two women. Ultimately, Pearl's songs help win her an early parole, with Susannah's assistance, if she'll agree to visit New York and appear at various academic meetings.

Act 2 brings Pearl to New York and into the public eye. As her 'guest' attracts public attention, Susannah loses sight of the fact that she originally was seeking authenticity, and begins to script appearances that mold Pearl into the character she thinks the public wants: a transformation designed to cast Pearl in a more appealing light to academic institutions.

From the moment Fox sings the old slave song, 'Trouble So Hard,' she grabs the audience.

This is not a musical: Other than the occasional, barely audible strum of Susannah's zither, all the songs are performed with no instrumental accompaniment.

But these songs come from Pearl's gut, pass through her heart and take no prisoners. We not only sense her lifetime of troubles, but we hear them clearly in the anguished sounds that come through the performance.

It's difficult to know what to make of Baker's performance. The character is so affected in speech and mannerism that she seems more two-dimensional than fully realized. Even the brief moments, when her humanity breaks through the coldness of her character, are difficult to believe.

That said, by the time the play reaches its emotional conclusion, there isn't a dry eye in the house ... including those of the actresses.
Posted by Bev Sykes at 9:32 AM