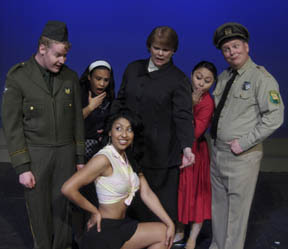 In order to enjoy the Woodland Opera House production of 'All Shook Up' - directed by Bobby Grainger, with music direction by Richanne Baldridge - it's necessary to forget all about the inane plot and dialogue.

It can be summed up pretty simply: 'Footloose' meets 'Mamma Mia.'

This musical, based on the songs made famous by Elvis Presley, tells of a town where the mayor (Nancy Agee) has passed the Mamie Eisenhower Decency Act, which means no public demonstrations of affection ... and absolutely no dancing or rock 'n' roll.

Cue a surprise visitor: a motorcycle-riding, guitar-playing, hip-shaking stud named Chad (Lafras le Roux), who is guaranteed to shake, rattle and roll things up. Repressed feelings start popping out all over the place.

Playwright Joe DiPietro borrowed liberally from Shakespeare's 'Twelfth Night' and 'As You Like It' for his plot, which involves women dressing as men to woo the guys they desire, and love letters sent by way of intermediaries. You'll also detect hints of 'Hamlet' and 'Romeo and Juliet,' along with the notion of music being the food of love.

Then there's the mayor's son, Dean (Eric Alley), who falls for Sylvia's daughter, Lorraine (Megan Sandoval). Not to mention Sheriff Earl (Steve MacKay), who has been in love with the mayor for years.

Sadly, all reference to The Bard ends with these borrowed plot elements. Happily, intelligent dialogue isn't necessary when you have good performances and fun dancing.

The performances and dances are great fun, from the opening number - 'Jailhouse Rock,' which I'm guessing occurred in some youth facility (unfortunately, I was seated at the back of the house and couldn't understand all the dialogue) - to the last bit of 'Burning Love.'

Le Roux's hips snap so smartly that we almost hear them click into place whenever he swivels his pelvis. His performance has enough Elvis to keep that image in mind, but Le Roux also has his own style, which works well for the character.

Amber Jean Moore is Natalie, a grease-monkey gal who 'never met a motorcycle I couldn't fix.' She falls for Chad and adopts the disguise of 'Ed' in order to be close to him. Moore is the epitome of a young girl with her first really big crush.

At the same time, Guiterrez's Dennis is the perfect nerd: helplessly and hopelessly in love with Natalie, who barely knows he exists, other than as a good friend.

Sandoval is a real standout as Lorraine, the daughter of the local café owner. Saldoval is irresistible, and we can't take our eyes off her when she's onstage.

As Lorraine's mother, Harris is less effective as an actress, but she brings the house down when she sings. Harris has a long history in gospel music, and it shows.

Alley is a surprise as Dean, who initially appears to be a stereotypical military school student. His reserve melts when he falls in love with Lorraine, and decides that 'It's Now or Never.'

Choreographer Gino Platina's dance numbers are excellent, and even include a tap number.

Laurie Everly-Klassen has done a nice job of dressing the cast in typical 1950s styles, and the real stand-out is Lorraine's poodle skirt.

If you liked Elvis and his music - or lively dancing and 1950s music in general - this show is for you.
Posted by Bev Sykes at 2:53 PM