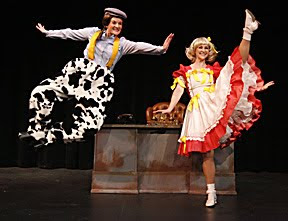 For as long as theater has existed, the institution has endured stage parents: those well-meaning mothers and fathers certain that their little Johnny or Janey will become the next superstar, and who drive producers and directors batty with their interference.

The quintessential stage mother was “Mama Rose” — Rose Havick — the mother of the Queen of Burlesque, Gypsy Rose Lee, and her sister, actress June Havoc. “Gypsy,” the story of Havick's role in the careers of her two daughters, is the current offering from the Davis Musical Theatre Company.

The production is directed by John Ewing and choreographed by Jason Hammond, who also plays Herbie.

The original award-winning musical was suggested by Gypsy Rose Lee's memoirs, with book by Arthur Laurents, music by Jule Styne and lyrics by Stephen Sondheim (still at the start of his career).

Rose is a dangerously obsessed woman with dreams of seeing her somewhat talented daughters achieve the stardom for which she herself is so hungry. The role was written for Ethel Merman, and Broadway has seen a long list of big names follow in her footsteps: Angela Lansbury, Tyne Daly, Rosalind Russell (who played the part in the movie), Bernadette Peters and Patti LuPone.

(Lansbury, Daly and LuPone all won Tony Awards for their performances; Merman lost to Gwen Verdon, in “Redhead.”)

In this DMTC production, Deborah Hammond has the role of a lifetime as Rose, and she makes the most of it. Hammond is powerful and unrelenting, and she has the big voice required by the role. Each of her numbers is a clear stand-out.

Hammond's real-life husband has the role of Herbie, the theatrical agent-turned-candy salesman-turned-theatrical agent who falls in love with Rose and hangs around for years, finding gigs for the act while waiting for Rose to marry him. Although the two Hammonds have been together and worked in theaters together for 30 years, this is their first shared appearance on stage.

Jason's Herbie is reminiscent of John C. Reilly, the mild-mannered husband from the film version of “Chicago”: a good guy who puts up with years of emotional abuse before finally giving up. Herbie's affection for Rose's daughters is touching.

Camila Ortiz and Lizzy Carey are the young “Baby Louise” and “Baby June,” respectively: two girls who really don't want to be in show business, but who can't say no to their overbearing mother. Carey does an excellent high kick and has a shriek that annoys more than impresses.

The business of their growing up is beautifully handled by a clever bit of stagecraft and a strobe light.

The grown-up Louise and June are played by Amy Jacques-Jones and Danielle Hansen. June, the star of the show, runs away when she reaches adulthood and secretly marries Tulsa, one of the company dancers; he's played by Joshua James, who brings a likable earnestness to the role.

Jacques-Jones nicely portrays the innocence of a young woman, living in her talented sister's shadow, singing to a toy lamb on her birthday and wondering exactly how old she is. Jacques-Jones handles the bumbling attempts to be the kind of performer her sister was. She's persuasive during her sudden realization, as she dresses for her first “strip” number, that she really is pretty, after feeling like an ugly duckling for so long.

The actress hits each of the emotions spot-on.

“Gypsy” has several interesting minor characters, such as Uncle Jocko (Clocky McDowell), who runs a talent show for children, with all the frustrations that involves.

The various strippers are quite funny, as they try to explain to Louise that she needs to find her own gimmick. Monica Parisi is Tessie Tura, Christina Ray is Mazeppa (who does amazing things with a trumpet), and Karen Mo is Electra.

Steve Isaacson does triple duty in three minor roles, and makes each unique.

Jean Henderson's costumes hit the mark, whether for Uncle Jocko and his children, the outlandish costumes for the strippers, or the glamorous gowns for Louise.

Everything's coming up roses for DMTC, with this production.