The Matter of Taste (feature article) 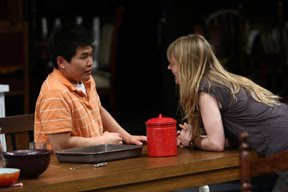 When Julia Child was inviting people to come into her kitchen, via television camera, nobody ever imagined that an industry ultimately would be created by people like Emeril Lagasse, Rachael Ray, Ina Garten, Bobby Flay and the queen of butter, Paula Deen.

Nor did anyone who was part of the early days of The Food Network imagine that its nighttime offerings eventually would become contests: baking things, constructing things, decorating things, mystery ingredients and elimination challenges such as could be found on 'Survivor.'

The next step was inevitable: Our 'hunger' for food preparation - as both entertainment and sporting event - would break down the imaginary theatrical fourth wall, at which point the audience would become a part of the action.

It's happening this week at the UC Davis Wyatt Pavilion, when the university's theater and dance department presents 'A Matter of Taste.' The production is directed by Granada artist-in-residence Anna Fenemore, artistic director of the Manchester, UK-based Pigeon Theater, an experimental physical performance company.

Working with food and cooking is nothing new for Fenemore. Her first Pigeon Theater project, 'The Housekeeper,' involved performers cooking for the audience.

'I lived with one of the performers at that point, who was from Italy and who was an incredible cook,' she said. 'We started making the show in our then-kitchen, and I thought 'Why don't we extend it, and do it in a slightly bigger kitchen. We'll feed them this wonderful Italian food that you can cook.' '

'This act of 'doing something for' and 'giving something to' the audience initially was merely a strategy for attempting a certain kind of intimacy between performer and spectator,' Fenemore said. 'Sharing food with another human being is an extraordinarily intimate act.'

Fenemore quickly realized that the food was doing far more than just connecting all the different people in the room at that time; it also was connecting those people with other, absent, people: mothers, grandmothers, fathers, daughters, lovers and friends. She saw the act of sharing food not just as an act of intimacy, but also as a ritual charged at one time or another with obsession, seduction, memory, shame, joy and - perhaps most importantly - pleasure.

For the 16 member cast of 'A Matter of Taste,' this will be an entirely new way to perform on stage.

'I'm asking them not to play a character,' Fenemore said, 'but to be themselves, and bring their own stories and histories to the stage.'

Not surprisingly, preparation for this show began with a pot luck dinner: Each actor was asked to bring a dish that had a story connected with it.

'We talked through dinner.'

A kind of collaborative script emerged from these food stories.

'We sometimes play with that - we sometimes tell lies - but ostensibly it's about these people, and it's somewhat autobiographical.'

Consider Won Joon Yoon, who is from Korea.

'He's cooking birthday soup, which usually is cooked by the mother on the son's birthday. But Won has been in the United States for the past eight years, and hasn't been with her on his birthday, so he hasn't had birthday soup for eight years. But she's here now, and he's cooking it for her in the show. It's a lovely moment.'

Fenemore warmed further to the subject.

'Lots of significant things happen during the relatively banal act of eating: We fall in love; we understand moments of loss and grieving; we make friends; we have family arguments; things break down or are created. What's really interesting is the kind of difference between what we often think of as the everyday ordinary act of eating, and the extraordinary things that might be attached to it.

'I'm interested in this particular collection of people, asked to cook food with memories and family stories attached. I'm asking them to present themselves: perhaps to tell us things they should only really tell their friends, to bring their cultural and social individualities together.

'I want to squeeze all this into a theater, and see what happens when an audience with its own food memories and experiences also is thrown into the mix.'

And yes, audience members will be served food during the course of the performance. They'll get tiny little tastes throughout the show ... although, given this country's safety regulations regarding food preparation for public consumption - unlike the more relaxed regulations in the UK - the shared food will be prepared by the university's food service personnel.

But it'll be prepared according to the actors' recipes.

'We've been working with the Food and Technology Department,' Fenemore explained. 'The students have had a great time, because they've all had knife-training skills. We all learned to chop very quickly, and we learned about safety with knives. Six actors are doing the knife work in the show, and they're using huge knives.

'We've also had half a day of basic food handling safety training.'

The cast members will sell the food featured in the show, and the party will continue after each performance on the Wyatt Deck, which will feature even more food, music and possibly dancing.

Along with a chance for audience members to share their own food stories.
Posted by Bev Sykes at 2:32 PM