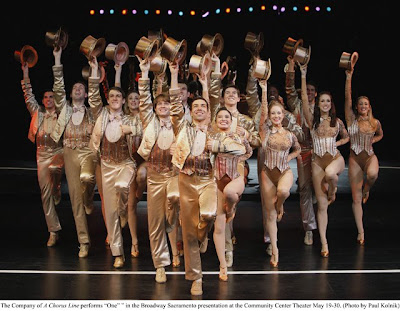 The original production of “A Chorus Line” opened at the Public Theater’s Newman Theater on May 21, 1975, directed and choreographed by Michael Bennett with music by Marvin Hamlish, book by James Kirkwood and Nicholas Dante.

The show transferred to Broadway’s Shubert Theater later that year. It won the Pulitzer Prize for drama, nine Tony awards, including best musical, score and book, and the New York Drama critics Circle Award. It ran for nearly 15 years, closing on April 28, 1990 after 6,137 performances and became the longest running American musical in Broadway history (a title eventually claimed by “Cats,” “Les Miserables” and “Phantom of the Opera”).

When the show was made into a movie in 1985 the cast included Davis’ own Tony Fields and Jan Gan Boyd in minor roles.

In its day it was cutting edge. We hadn’t yet seen “So You Think You Can Dance” or experienced the angst of young performers working their tails off and giving their all trying to achieve stardom on “American Idol.” Confessions of what it’s like to grow up gay, enduring the taunts of fellow students were new and perhaps shocking revelations to some. “A Chorus Line” richly deserved all of the accolades that it received.

In 2006, the musical was revived by Baayork Lee (who originated the role of Connie Wong) and Michael Bennett’s co-choreographer, Bob Avian and is presented as a 2 hr 10 minute one-act show.

Patrons are warned to be in their seats by 8 p.m. sharp because no one will be admitted during the first 5-10 minutes of the show. This is where we get our first glimpse of the large group of dancers who will eventually be whittled down to only eight through an intensive audition process that will ultimately include not only dance ability, but very personal in-depth interviews by the director Zach (Derek Hanson).

The initial number has a relentlessness to it as the dancers try to learn a complicated dance step and the first cut, of roughly half the group is made. It’s a scene designed to make non-performers wonder why people put themselves through such pain and suffering, but the end of the number, with all the semi-finalists lined up behind their 8x10 glossy headshots is a stunning tableau.

After Zach informs the dancers that he wants to know more about them, they begin with great reluctance to talk, revealing portions of their life stories. In order to get this job, they must put themselves on the line.

Mike (Andy Mills) recalls attending ballet classes with his sister as a pre-schooler and discovering a love of the dance.

In “Sing” Kristine (Hilary Michael Thompson) confesses to being tone-deaf.

“Nothing” tells of Diana’s (Kristin Tucker in this performance) frustration with her first acting class, while Val (Kristen Martin) explains how she came to reshape herself into a more appealing commodity, through the use of plastic surgery in “Dance 10, Looks 3.”

Nicky Venditti as Paul gives an emotional description of the pain of growing up gay and the rejection of his parents. His monologue earned him special audience applause.

Sacramento home town girl, Rebecca Riker, has the plum role of Cassie, former lover of Zach, whose aspirations are merely to be part of a chorus and whose relationship fell apart over her lack of desire to be a star. (“Well, it would be nice to be a star...but I’m not; I’m a dancer.”)

Zach’s question to the group “What would you do if you couldn’t dance?” gives the lead-in to one of the show’s most beautiful numbers, “What I Did for Love” sung by Diana (Selina Verastigui), and then the entire company.

The show ends with the stunning “One,” with all the chorus members resplendant in their gold costumes, moving together as one body.

All the familiar elements are there in this production yet somehow, except for a few outstanding moments, it seems a bit dated and maybe a bit tired. It was kind of “Dance 10, Relevance 3.”
Posted by Bev Sykes at 6:09 PM