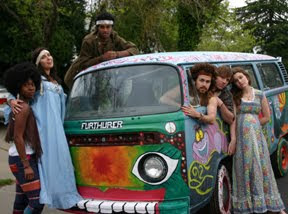 Attending any production by UC Davis' student-run Studio 301 company is always an adventure, whether patrons try to find a tiny room through a darkened passageway ('Fuddy Mears'); sit outdoors, on ice-cold cement in November, in someplace called 'The Death Star' ('MacBeth'); or lounge on the delightful Wyatt Pavilion deck on a warm midsummer night evening ('Midsummer Night's Dream').

The group always brings something fresh and unexpected to its productions, before a single actor walks onto the stage.

Studio 301's handling of 'Hair' - the 'American tribal love-rock musical' by Gerome Ragni and James Rado, with music by Galt MacDermot - is no exception.

This production is directed by Steph Hankinson, with musical direction by David Moschler.

The group has chosen UCD's Arboretum gazebo - on Garrod Drive, off La Rue - a bucolic location that works well for a production about flower children. As the cast mingled with the patrons, handing out flowers before the show started, I realized that this group of young people might have had grandparents who were part of the hippie movement.

That era, more than 40 years ago, was a time when we were engaged in a disastrous war ... and people protested that war with a passion. And yet, despite the horrors of that overseas conflict, Americans still believed they could make a difference: They cared enough to raise their voices in protest.

Sadly, I don't think we do that any more, as caught up as we are in the affairs of Tiger Woods, or whether Kate will leave Jon, and who will become the next American Idol.

All of which may make 'Hair' an historical piece, rather than something fresh and vibrant. The U.S. military no longer uses a draft, so nobody has a draft card to burn, and we're more concerned about people who can't get into the service, than we are about wondering how to get out of it.

Nevertheless, the cast of Studio 301's 'Hair' gets into the swing of things quite well, starting with dancing on the grass and through the audience to the outdoor stage, where the show opens with a rousing rendition of 'Aquarius,' sung by Linda C (Alyssa Parsons) and the rest of the cast.

The show has a plot of sorts: Claude Hooper Bukowski (Mark Ferrando) has received a draft notice, and he struggles with his conscience over whether to present himself for induction, or burn his draft card and remain with his friends, enjoying the free lifestyle and protesting the war. Ferrando brings poignancy to his role.

But while Claude's struggle may drive the plot, this show actually is about music: 'Hair' was this country's first rock musical, with minimal dialogue. Songs such as 'Aquarius' and 'Let the Sunshine In,' the closing anthem, have a permanent place in our musical history.

Many in the cast give good performances, including Esteban Daniel Pantoja Gonzalez as Claude's roommate, George: long-haired, barefoot, anti-establishment and rocking out to songs like 'Donna.'

The first act 'nude scene,' so shocking when 'Hair' first opened in 1967, seems a more natural part of the action than anything to raise an eyebrow over, in this modern era when nudity in the media has become more common. In this production, the sequence is brief and tastefully done.

The music is provided by the band Vaseface and the Optical Illusions, and they're outstanding.

Patrons planning to attend this production are advised to bring either blankets or chairs. Dress warmly, and then bring an extra blanket, just in case. (We didn't and were much colder than anticipated.)

A flashlight also would be wise: While the path from the street is signed well for arriving patrons, things are pitch-black - with no lights - once the show concludes.

A parking lot is close, but it lacks a machine for the necessary $6 ticket; if on-street parking isn't available, you'll need to visit another parking lot to purchase a ticket.

Back in the 1960s, we dreamed that a time would come when 'peace will guide the planet.' I don't know if that's possible any more, but it's nice to reminisce and remember those idealistic days, when we still held on to such promises.
Posted by Bev Sykes at 11:05 PM