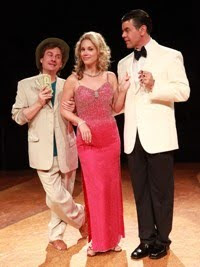 The first time I saw “Dirty Rotten Scoundrels,” which continues through Sunday at the Music Circus, my review centered on how pun-riddled the show is, and how I spent the evening groaning and rolling my eyes.

I therefore was surprised to count only two audible puns in this production; worse yet, my favorite bad pun was botched. The set-up line, “I'm Muriel, of Omaha,” was so muffled that the following lines — “Pleased to meet you.” “It's mutual.” — didn't get so much as a titter from the audience.

Whether some minor script re-write had taken out most of the puns, or whether the poor sound quality on opening night — much more muddled than usual — was to blame, remains irrelevant. The audience members, particularly two very loud ladies sitting behind me, had the time of their lives.

The show is based on the 1988 film starring Michael Caine and Steve Martin — itself drawn from 1964's “Bedtime Story,” with Marlon Brando and David Niven — and has been adapted for the stage by Jeffrey Lane (book) and David Yazbek (music and lyrics). This Music Circus production is directed and choreographed by Richard Stafford, with musical direction by Darren Cohen.

Burke Moses plays Lawrence Jamison, who has lived on the Riviera for years, playing a faux prince and bilking rich American women out of their money. He becomes a Henry Higgins-esque mentor when he takes a brash American con-man, Freddy Bensen (Timothy Gulan), under his wing to teach him the finer points of swindling.

Gulan played the same role in the touring production of this show, which came through via Sacramento's Broadway Series a few years ago.

“Chimp in a Suit,” sung by Jamison's right-hand man, the gendarme Andre Thibault (John Scherer), is a scene right out of “My Fair Lady,” as Jamison attempts to teach Freddy how to clean up his act. Freddy is a more-than-willing pupil, as he looks around Jamison's mansion and decides that he, too, wants “Great Big Stuff.”

When the first lesson goes terribly wrong — the wooing of hyperactive oil heiress Jolene Oakes (Amy Bodnar) — Jamison is helped out of his predicament by Freddy, who pretends to be a brother with one too many (too few?) chromosomes in his DNA.

It soon becomes apparent that the Riviera isn't big enough for two scoundrels, and so when “Soap Queen” Christine Colgate (Jessica Rush) arrives on the scene, Jamison and Freddie agree to a contest: whoever can get $50,000 out of her will be the winner, and the other will leave town.

The contest soon turns personal, as each vies not just for Christine's money, but also for her affections. More than a few surprising plot twists and turns pop up before the finale.

This is a delightful cast. Moses, who has one of the most flexible mouths since Joe E. Brown, is the suave, elegant and debonair gentleman to Gulan's crass yet delightful cad.

Scherer is a Frenchman (“only by birth and affectation”) who hasn't learned to be a ladies' man yet, until forced to deal with Muriel Eubanks (the delicious Cynthia Ferrer); she's one of Jamison's conquests, and must be kept distracted. Scherer and Muriel provide a delightful subplot to the central story.

Rush is earnest and winsome as the naive heroine, who proves to have more to her than meets the eye.

Bodnar is high-powered and brash as she describes life in Oklahoma panhandle to the clueless Jamison, who finds himself engaged in more than just a little hanky-panky with her.

“Dirty Rotten Scoundrels” has the feel of a classic production with modern elements, though none of its songs is actually memorable. The show is raunchy and crude at times, but always funny; we can't help forgiving the antics of two heroes who are such lovable scalawags.