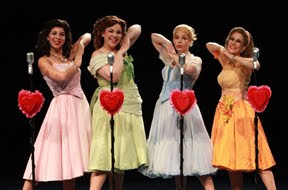 In a Music Circus season that includes heavy hitters such as 'Funny Girl,' 'Oklahoma!' and '42nd Street,' the inclusion of a lightweight called 'The Marvelous Wonderettes' seemed rather strange.

This isn't a show everyone has heard of, or has been waiting to see.

'The Marvelous Wonderettes,' written and created by Roger Bean, doesn't have a high-powered history. It first opened at the Milwaukee Repertory Theater in 2001, then moved to Los Angeles, where it garnered many awards and nominations, including the 2007 Los Angeles Ovation Award and a 2007 Los Angeles Drama Critics Circle Award. It debuted off-Broadway at the Westside Theater in September 2008, where it ran until 2010.

This Music Circus production is directed by Bean, who helmed the New York run, with choreography by the Big Apple's Janet Miller.

The plot, such as it is, revolves around four young girls at a high school prom in 1958. A boys' singing group, The Crooning Crabcakes, won't be able to perform for the evening, because their leader was caught smoking near the girls' locker room; as a result, The Marvelous Wonderettes are asked to fill in.

Beginning with the Chordettes' hit, 'Mr. Sandman,' the girls run through a long list of popular music from the 1950s, probably familiar to most of the over-50 crowd in the Music Circus' opening-night audience. Songs such as 'Lollipop,' 'Allegheny Moon,' 'Secret Love' and 'Sugartime' follow, one after another, with short bits of business allowing us to learn a bit about the girls.

We discover that Suzy (Bets Malone, one of the original cast members) is in love with the unseen Ritchie, the guy running the prom lights; he blinks the lights whenever she giggles his name. Missie (Misty Cotton, whom we just know will grow up to become a teacher) has a big crush on Mr. Lee, one of the teachers sitting in the audience.

In a bit of audience interaction, an unsuspecting patron is brought up on stage during the number 'Mr. Lee.'

Cindy Lou (Lowe Taylor) is convinced she's going to be named prom queen, and she spends much of Act 1 preening. She also has her eye on the boyfriend of prankster Betty Jean (Lindsay Mendez), a master of mugging.

The rivalry between Betty Jean and Cindy Lou gets a bit old and repetitious by the end of the first act, but the music certainly had toes tapping, and lots of people sang silently along with the familiar tunes.

The second act takes place at the high school's 10-year reunion, with the singers now in miniskirts and go-go boots. Sadly, life hasn't been as kind to these women as their 1958 prom promised.

Cindy Lou went to Hollywood to get into the movies, only to discover that she didn't really want to be in the movies; she just wanted to be somewhere else. She learned that her heart's desire was waiting for her back at the sweet shop, where she worked in high school.

Suzy, pregnant and having marital problems with Ritchie - he's still back at the lightboard - sings a rousing medley of 'Rescue Me' and 'Respect.' She's very funny, transforming her nervous giggle into a helpless sob of advanced pregnancy.

Act 2 ignores the whole psychedelic part of the 1960s and concentrates on story-generating songs, such as Dusty Springfield's classic 'Son of a Preacher Man.'

The show involves additional audience participation, such as having patrons vote for prom queen during Act 1 - with pencils and ballots given to each person entering the theater - and a few other surprises throughout the evening. The counting of the ballots is particularly funny.

Its lightweight origins notwithstanding, this 'jukebox show' delivers in its own way. For people of a certain age, who remember what it was like to be young, with a life full of promise ahead, 'The Marvelous Wonderettes' certainly brings back memories and puts a smile on one's face.
Posted by Bev Sykes at 10:37 AM