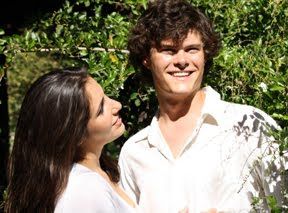 Davis' newest theater company, the Davis Shakespeare Ensemble, selected a beautiful spot and a lovely night for the opening of its debut offering, 'Romeo and Juliet.'

The production, directed by Rob Salas, is presented in the gazebo at the UC Davis Arboretum; a circle of folding chairs is placed around the stage area, and twinkling lights add to the setting's magic. As the audience enters the seating area, the cast members stand at the posts surrounding the stage and ring chimes.

These chimes become part of the play itself, as the evening progresses.

This shoestring production doesn't have a 'set' per se, but the actors bring the story to life without really needing much.

Likewise, the play is done in modern dress.

This is a lusty, modern version of Shakespeare's classic tale. The opening sequence is a whirl of bodies, with actors coming dangerously close to the seated audience, although stepping agilely over patrons' toes.

The seven-member cast handles all the roles; only the actors playing the title characters do not take on multiple parts.

Ian Walters is a perfect Romeo: a curly headed lad in the throes of his first love. He has the swagger and bravado of a young man when in the company of his friends, upholding the family honor against their generations-long enemy, the Capulets.

And yet Walters is awkward and shy when Romeo is in the presence of Juliet, who makes his hormones rage.

He doesn't quite know how to woo her.

The structure of the gazebo calls for a rather ingenious 'balcony scene,' the likes of which you probably won't see again.

You'll wonder how they'll pull it off, as the play approaches that scene, but it works beautifully.

Gia Battista's Juliet, no shrinking violet, is a young woman who knows what she wants and what she doesn't, and won't let family enmities stand in her way.

The wedding night scene is both sensuous and innocent, and both actors make excellent use of a long piece of filmy cloth to suggest a bedroom.

All this said, the actor who impressed me most on opening night is Mark Curtis Ferrando, who played both Mercutio and Paris. Ferrando did his first Shakespeare ('The Winter's Tale') only a year ago, and at that time was unfamiliar with the style.

Ferrando certainly has blossomed in this production. He brings the necessary physicality to his fight scenes, and oozes sexuality as he instructs Romeo on the art of wooing.

Every young girl should have a nurse like Stephanie Hakinson (who also plays Sampson in this production). The nurse engages in almost conspiratorial chatter with her mistress, regarding her amorous adventures, and becomes a real friend to the girl.

Kristopher Ide's Friar Lawrence is a lone voice of reason amid pride, prejudice and persecution.

Matthew Canty plays both Romeo's cousin Benvolio and the servant Balthasar; Brendan Ward is Juliet's cousin Tybalt and her father.

This 'Romeo and Juliet' is an impressive start for the fledgling theater company, which promises even better things to come in the future.
Posted by Bev Sykes at 4:47 PM