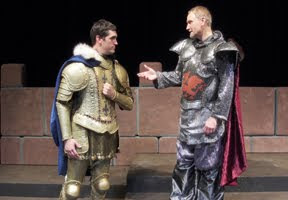 All those things can be found in the Woodland Opera House production of Lerner and Loewe's classic musical, adapted from T.H. White's 'The Once and Future King.'

Director Rodger McDonald has created a world that is long on talent, opulent in terms of costumes (by Laurie Everly-Klassen), spare on actual set pieces, but effective on suggested scenes (set and lighting design by Jeff Kean).

One cannot go wrong with Bob Cooner's Arthur. The precision that Cooner brought to WOH's recent 'Noises Off' - as director - beautifully translates into his performance as the reluctant king, who is afraid to meet his new bride. As the play progresses, Arthur grows into his role as king, as his love for Guenevere (Alexandra Ralph) deepens.

His pain at discovering her betrayal - and the anguish of sending her off with Lancelot (Ryan Favorite), as Arthur watches his dream of a world ruled by law crumble - are palpable.

Alexandra Ralph is a mesmerizing Guenevere, whose 'youth was sold' when she was given in marriage to this stranger, King Arthur. Guenevere isn't ready for maturity, since she hasn't yet had an opportunity to experience the 'simple joys of maidenhood':

Ralph sings beautifully, and her manner and bearing are so reminiscent of local actress Lenore Turner-Heinson, that I was surprised to discover that her previous performances have been in the Bay Area. Ralph is wonderfully sympathetic, warm and flirtatious all at once; it's obvious that while Guenevere has come to love Lancelot, she still has feelings for Arthur as well.

As for Lancelot, what can I say about Ryan Favorite?

He makes his entrance through the boxes on the side of the theater, and when he bursts out with the first lines of 'C'est moi,' he leaves the audience stunned at the force and tone of his voice. Favorite is a real treasure and perfect for the role: full of himself but later softening, as he becomes the king's friend and, later, the queen's lover.

My only complaint with his performance is that he speaks in a French accent, but inconsistently. Sometimes it's a thick accent, sometimes it's barely noticeable, and sometimes it's not there at all. When one can sing like this, it's a minor point ... but it does jar the suspension of disbelief.

McDonald, also taking an acting role, dominates the stage during his first scene as the eccentric Pellinore, who becomes Arthur's oft-befuddled aide. McDonald is delightful.

It's a wonder that Steve MacKay's Merlin has such a stout figure under his flowing robes, because with that unbelievably thick mustache, I can't imagine how he could eat anything at all. Still, his brief appearance - before being lured away by the spell of Nimue, the Lady of the Lake (Laura Wardrip) - adds just the right touch.

Dan Sattel also turns in an outstanding performance as Mordred, Arthur's deliciously bitchy illegitimate son, who is responsible for bringing down the king's dream of a world where disagreements are solved by rule of law, rather than by swordplay. Sattel enjoyed the loud round of boos that he received at the curtain call.

Young Liam Murdock, as Tom of Warwick, is earnest in his desire to become a knight of the round table; he gives an excellent performance.

In the opening scenes, Arthur tells Guenevere that 'there's not a happier spot for happily ever-aftering' than Camelot. Even though Arthur's dream ultimately falls apart, we're fortunate that this happy spot can be seen for a few more weeks at the Woodland Opera House.
Posted by Bev Sykes at 11:30 PM