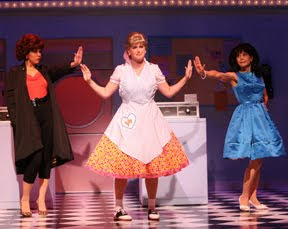 As its title suggests - 'Suds: The Rocking '60s Musical Soap Opera' - the final show of the Cosmopolitan Cabaret's 2010 season is light, frothy and insubstantial.

And the audience loved it.

This jukebox musical has a paper-thin plot, but who cares about plot when you have more than 50 songs from the 1960s?

But for those who do care about such things, the story revolves around perky Cindy (Melissa Wolfklain), decked out in crinoline skirt and bobby socks, who runs the local Fluff and Fold Laundromat. The action begins on her birthday, and she is the happiest girl in the world: She's almost engaged to her long-distance boyfriend, whom she's never met, but with whom she has been a pen pal for four years.

She also loves her little cat.

But then tragedy hits: Said boyfriend breaks up with her, because he has found someone with better penmanship. Her cat dies, all her relatives are killed in an automobile accident, and she receives a $10,000 overdue notice from the IRS.

Cue appropriate song: 'The End of the World.'

Cindy decides to kill herself in a most ingenious way, which I won't reveal. Let's just say that much agitation is involved, and it's hilarious.

Enter her guardian angel. Two of them, in fact.

The perpetually perky Dee Dee (Eydie Alyson) is overly optimistic, and convinced they can pull Cindy out of the doldrums. DeeDee is joined by Marge (Nanci Zopp), a tough ol' broad who has been around the stratosphere a few times (if you know what I mean).

Alyson is given the lighter songs, but Zopp is the standout, especially in her show-stopping 'You Don't Have to Say You Love Me.'

The cast is rounded out by Michael Dotson, who plays 'Everyone Else': the postman; the nerd the angels set up as a date for Cindy; and even Johnny Angel, a surprise revelation to whom Dee Dee finds her heart drawn ('I Will Follow Him,' 'Johnny Angel'). Dotson provides several of twists and turns throughout the evening.

Like 'The Marvelous Wonderettes,' a Music Circus production this past summer, the appeal of 'Suds' rests on one's nostalgia for songs of a certain era. 'Suds' include more songs than some jukebox musicals, by using the device of humorously stopping a singer after just enough of a song is presented, to receive audience recognition and applause.

'Suds' was created by Melinda Gilb, Steve Gunderson and Bryan Scott, with musical and vocal arrangements by Steve Gunderson. The show has toured the country, receiving rave reviews from California to New York. It broke many box-office records, including at the prestigious Old Globe Theater, the Actors Theater of Louisville and the San Diego Repertory Theater.

The current production is directed by Glenn Casale and choreographed by Joann Lewis.

If your tastes tend toward meaty shows, this one probably isn't for you. But anybody wanting to take a break from all the heavy news of the day, in order to wallow in a bit of cotton candy for a couple of hours, may find this just the very thing.

Especially if you loved the music of the day.
Posted by Bev Sykes at 7:44 AM