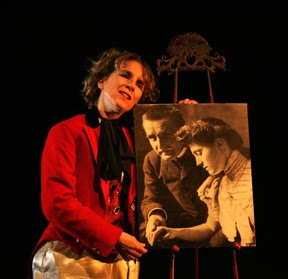 The magic begins the moment one enters the Mondavi Center's Vanderhoef Studio Theatre, where set designer John Iacovelli has created an old-style circus ring, with a tent suggested by hanging lights.

Composer/sound designer David Roesner's jazzy music fills the air, and the lid of a large trunk opens. A woman emerges, dressed from head to toe in fur, and so begins 'Tilly No-Body: Catastrophes of Love.'

This one-act play in 20 'attractions' (as each section is called) is devised by actor, writer and UC Davis acting professor Bella Merlin. She performs the role of Tilly, wife of Frank Wedekind, perhaps best known to today's audiences as the German dramatist who wrote the 1891 play 'Spring Awakening,' on which the Tony Award-winning musical was based.

'Tilly No-Body' is the culmination of 20 years of work.

In 1991, Merlin was cast as Lulu in Peter Quint's new translation of Wedekind's plays 'Earth Spirit' and 'Pandora's Box,' at London's Chelsea Theater. While preparing for the role, she came across the autobiography of Wedekind's wife, Tilly, titled 'Lulu: Die Rolle Meines Lebens (Lulu, the Role of My Life).'

While reading the book, Merlin expected to discover that the role of Lulu had ignited Tilly's acting career and propelled her to great professional heights. But Merlin discovered that within the Wedekinds' domestic relationship, Frank had turned Tilly into Lulu, one of the key roles in classic modern drama: part child, part whore, part gypsy, part muse ... a chameleon who changes her name and guise to become all things to all people.

In 'Tilly No-Body,' Merlin weaves together Tilly's autobiography, quotations from Frank's plays and letters between herself and Frank. The performance piece also includes five original songs Merlin composed - she sings them and accompanies herself - along with certain fictionalized suppositions.

Ultimately, Merlin regards herself a 'deviser' (as well as performer) rather than 'playwright,' because of the many different aspects to the composition of this work.

Watching the talented Merlin at work is a privilege. She's a consummate performer: Under Miles Anderson's direction, she thoroughly embodies the character of Tilly.

The play begins with Tilly's attempted suicide via poison. Then, as the poison gradually works its way out of her system, she relives various key points in her life, granting us a view of the symbiotic and abusive relationship she experienced with Frank, and the effect it had on her.

Merlin explains that the poison worked its way out of Tilly's body through her skin, and so the play uses the device of removing layers of clothing, to illustrate the parts of Tilly's life. She leaves these layers behind during her recovery from the poison, and from Frank's impact on her life.

Costumes play a huge role in this production, and costumer Maggie Moran has done a masterful job with the layers of Tilly's wardrobe. A voluminous fur coat, for example, is removed to reveal a stunning ringmaster's costume (including a jeweled cummerbund donated to the university many years ago, by costumer Marinka Pfaff).

Pieces of costume emerge from odd places, and one costume morphs into something completely different.

The mood is greatly enhanced by Thomas J. Munn's lighting design: long shadows and mood lighting that are as much a 'character' as Tilly herself.

And I cannot leave out the wonderful puppet creations of John Murphy, whose characters add so much to the whimsy of certain sequences.

More than merely telling Tilly Wedekind's story, 'Tilly No Body' explores the idea of who and what a jobless actor is.

During a recent episode of 'Theater Talk,' Robert Osborne discussed various films - notably 'All About Eve' - that show how roles are crucial to an actor's identity. Similarly, Merlin reveals how the loss of an acting persona affects Tilly's life.

'Without work, actors are lost souls,' Merlin writes, in the program notes. 'Without a play, we have no voice. Without a character to perform, we have no body.
Posted by Bev Sykes at 6:25 PM