'It rocks the world of traditional theater while exploring sex, identity, lust, love, infidelity, deception and denial with burlesque flair. It is sophisticated and coarse at the same time.'

Director Peter Lichtenfels notes that the play feels like 'vaudeville and (almost) stand-up comedy.' He thinks audiences will enjoy the bawdy and surprisingly contemporary humor of 'Gallathea.' Fans of 'As You Like It' 'are sure to enjoy Lyly's play and Lichtenfels' fun and uproarious update of this classic.' 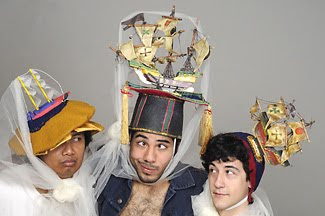 Showing off their ship hats - the Nina, Pinta and Santa Maria - are,
from left, Mark Suarez, Matthew Canty
and Mitchell Vanlandingham,
in UC Davis' production of 'Gallathea.'
(Matthew Dunivan/Courtesy photo)

Lichtenfels first read the play three years ago and fell in love with it.

'It's funny, contemporary, and deals with issues that are of concern to our society today. I was blown away by it and couldn't understand why it's rarely done,' he said.

Though Lyly's language is more accessible to today's audiences than Shakespeare's, the director modernized a few words in the text, but the staging is contemporary, and he does not attempt to do it in the traditional way it would have been done in 1588.

'What I like doing is looking at a play and filtering what it says about now. My ethos is always 'why do a play if it doesn't talk to us,' ' he said. 'Early modern ideas about men, women and the flexibility of gender are both remarkably similar and completely different to ours today in 'Gallathea.'

'The similarities help us to think about gender and sexuality through the differences of a society and culture from over 400 years ago - with thought-provoking and challenging perspectives on what many people today take for granted.'

Costume designer and Ph.D. candidate Liz Galindo remarks, 'Gallathea is a historical play and creating costumes with a contemporary twist has been a challenge.'

Galindo's costume designs have been featured in recent films, including 'The Curious Case of Benjamin Button,' 'Charlie's Angels' and 'There Will Be Blood'; on TV's 'Sex in the City'; and on the red carpet at the Oscars, Emmys and Golden Globes. Actresses Sophia Loren, Cate Blanchett, Cameron Diaz and Uma Thurman have worn her Galindo Couture gowns. She has designed a total of 28 hats for 'Gallathea.'

'This show is about life and all the different hats one has to wear from childbirth to death,' she explains, so it seemed logical to design hats to represent that fact.

She took inspiration from London milliner Philip Treacy, whose hats were featured in one of this season's episodes of 'Project Runway.'

'I had fun researching 21st century haute couture hats and then started creating fun, sexy and over-the-top hats for each character,' Galindo says.

Three brothers wear ship hats that bring Monty Python to mind as the Nina, Pinta and Santa Maria adorn their heads. She got the idea from one of Treacy's hats of a three-masted ship, and she found vintage wooden boats on e-Bay.

'The challenge is making them stay on,' she laughed.

The shaping of this production has been a collaborative process. The actors and director participated in an improv workshop that allowed everyone to voice ideas that would be incorporated into the finished product.

The group even set up a Facebook page and characters from the play have Facebook identities and participate in online discussion as their characters.

'I'm finding myself looking at the astronomical time that daylight-saving time ends,' says the character of Tyterus, whose bio includes the fact that he is self-employed as a shepherd and that he likes to 'tend to flock, marvel at landscape and tell stories to daughter.'

Lichtenfels was inspired by watching how his son could multi-task, using the cell phone and an iPod while watching television and keeping up-to-date with his friends on Facebook, all at the same time. His production will include not only the action on stage but also will incorporate video and sound.

Multi-media artist John Zibell decided to give cameras to the actors and let them film the action on stage from the wings (or just themselves backstage), which then will be projected onto two screens on the stage itself.

The audience also will be permitted to use cameras and cell phones, if they wish, and are encouraged to text or tweet about the performances as they are happening.

'We have to ask how kids want their stories told these days,' Lichtenfels said. 'They like short bursts of lots of stuff.'

It seems clear that 'Gallathea' will consist of 'lots of stuff,' and that Lichtenfels may be discovering new ways for younger audiences to enjoy a 16th century classic in the age of television, the Internet and instant gratification.
Posted by Bev Sykes at 4:48 PM