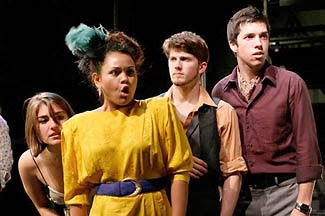 I am continually impressed with the quality of work by Studio 301, the self-funded, UC Davis student-run production company. Recent productions have included 'A Midsummer Night's Dream' in the bucolic Arboretum setting, 'MacBeth,' an outdoor production in the stark castle-like setting of the university's 'Death Star,' the offbeat 'Fuddy Mears,' hidden away in a building in the theater area, and the delightful 'Hair,' another outdoor production near the gazebo in the Arboretum.

The rather traditional setting of the Wyatt Pavilion for Neil Simon's comedy 'Rumors' seemed somewhat tame by comparison, but that did nothing to diminish the quality of this production, directed by Ulysses Morazan and Jazz Trice.

Simon's homage to the drawing room comedies of the 1930s involves a lot of running up and down stairs of the set designed by Jennifer Varat, a lot of slamming of doors, and a lot of slapstick comedy by the actors. Kudos to Varat for making such a sturdy set.

The story takes place at a black-tie dinner party to celebrate the 10th anniversary of New York Deputy Mayor Charley Brock and his wife Myra (neither of whom is ever seen), but as the action begins, things are already in a shambles. The first guests to arrive (Gordon Meacham as Charley's attorney Ken and Monica Ammerman as his wife) have discovered that their hosts - and all the servants - have been incapacitated by mysterious events. We aren't sure exactly what happened, but the one certainty is that a gun is involved.

Panicked by the backlash this potentially embarrassing situation could cause, as more guests arrive, Ken and Monica's neuroses run wild, and they begin to make up wild explanations for the unavailability of their hosts. As more of the story begins to be revealed, all the guests fall into a pattern of lying and cover-ups until the mind reels trying to remember which lie was which. The Simon script beautifully brings out each character's individual character flaws, taking the mounting hysteria in several different directions.

The others in this fine cast include Kyle Lochridge as the accountant Lenny and his wife Claire (Stephanie Moore); Bijan Ghiasi as Charley's psychiatrist Ernie and his wife Cookie (Malia Abayon), Glenn (Matt Kronzer), a state senatorial candidate and his wife Cassie (Christina Rabago), and Anna Kritikos, who almost steals the show with her excellent Officer Welch.

Lochridge deserves special mention for his very long, very funny second act monologue, as he pretends to be the absent Charley Brock trying to explain the strange goings on to the police. (He also wins applause for his whiplash injury, leaving him looking like the Modigliani painting hanging on the wall of the apartment.)

Likewise, Abayon earns high praise for her portrayal of a woman with severe back problems who decides to step up and be the hostess for this weird party and cook up a fancy dinner.

Olufunmilayo O. Alabi has created some lovely costumes, particularly the long black and white gown for Monica and the shorter green gown for Cassie, which beautifully set off Anna Kritikos' features, especially after she let her hair down.

The saddest thing about this play is that there were so few in the audience on opening night. If you're in need of a good laugh, you just may find the best medicine to be at the Wyatt Pavilion through Sunday.
Posted by Bev Sykes at 4:58 PM