How to Succeed in Business... 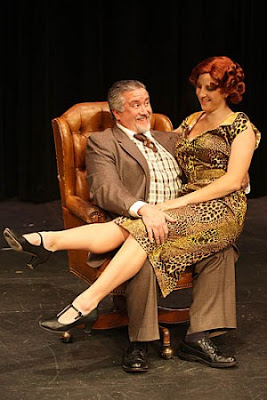 The Davis Musical Theatre Company has a solid hit on its hands, if the sparkling premier performance of “How to Succeed in Business without Really Trying” is any indication.

Despite a utilitarian set, which sometimes had a mind of its own, this production, directed and choreographed by Rand Martin (who also designed the set), boasts a strong cast and a good-sounding orchestra and hits all the important points spot on.

The book by Abe Burrows, Jack Weinstock and Willie Gilbert, with music and lyrics by Frank Loesser, is based on the book of the same name by Shepherd Mead. The original show, which opened in 1961, was a big hit for Robert Morse, won seven Tony awards, the New York Drama Circle award and the 1962 Pulitzer Prize for drama.

A film was made in 1967 and the show was revived on Broadway in 1995, starring Matthew Broderick. It is currently in a new Broadway revision, starring Daniel Radcliffe of “Harry Potter” fame.

It is the story of an ambitious young window washer, J. Pierrepont Finch, who is convinced he can quickly rise in the corporate world with the help of a book called “How to Succeed in Business without Really Trying.” Throughout the play we hear the unseen voice of the author of the book (the voice of Don Geronimo).

Director Martin explained that he went looking for the original Mead book, hoping to get a better cultural understanding of corporate America in the middle of the last century, and was immediately struck by the fact that he could have been reading a book written in 2011.

Except for women having a slightly bigger role in running America’s corporations and more of an attempt to control sexism in the workplace today, much of the advice by the author still holds true, and everyone still strives to do things “The Company Way.”

Integral to the success of a production like “How to Succeed in Business Without Really Trying” is a likeable Finch, and David Holmes, reprising his 2003 performance, certainly fits that bill. Despite his conniving to get to the top of the World Wide Wicket Company, Holmes remains a guy we can relate to.

Thanks to a chance meeting with WWW President J.B. Biggley (Paul Fearn, in one of his best roles), Finch gets a position in the mail room, where he encounters Biggley’s nephew, the whining, lazy Bud Frump (Clocky McDowell), who has his own ideas about how to climb the corporate ladder, and it has everything to do with nepotism. McDowell succeeds in making Frump the guy you’d most like to root against.

Finch also gets a hand from secretary Rosemary Pilkington (Kay Hight), who immediately sets her hat for him and reveals that her only real goal in life is to find a husband for whom she will be “Happy to Keep His Dinner Warm,” as he rises to the top.

Almost everyone in the cast gives a strong performance, particularly Eimi Taormina as Rosemary’s friend Smitty, and Andy Hyun, doing double duty as Mr. Twimble, the head of the mail room, and Wally Womper, the Chairman of the Board.

Gerald Shearman as the womanizing executive, Milton Gatch, and Scott Minor as the personnel manager, Bert Bratt, are particularly good in their roles.

Mary Young does not disappoint as Biggley’s secretary, Miss Jones, who takes a liking to Finch and helps him in his endeavors. Brittany Bickel does a wonderful job as Hedy LaRue, the femme fatale. (And you can buy a Hedy LaRue martini in the theater’s new bar in the lobby at intermission.)

There are wonderful production numbers such as “Coffee Break,” which most people probably can relate to, and “Brotherhood of Man.”

This is another hit for DMTC and is highly recommended.
Posted by Bev Sykes at 11:49 AM