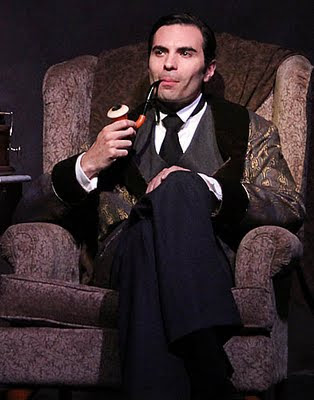 Now we know what Sacramento Theatre Company’s Mrs. Badden-Rotten (Cinderella) looks like when she gets out of drag and off those impossibly high heels. Underneath, she’s … Sherlock Holmes!

Director Michael Laun has successfully reunited two of STC’s most beloved performers, William Elsman and Michael RJ Campbell, as Sherlock Holmes and Dr. Watson, respectively, in a delightful adaptation of Stephen Dietz’s “Sherlock Holmes: The Final Adventure,” based on the original 1899 play by William Gillette and Arthur Conan Doyle.

The opening-night performance was particularly delightful because of the large number of audience members who dressed in traditional Victorian costumes, with tall hats and day coats for the men and feathered hats and long, layered skirts for the women. It was like stepping back into the 19th century.

It’s difficult to know quite how to classify this play, which is both a tribute to the Conan Doyle mysteries and a parody of those mysteries. In the end, it probably doesn’t matter because, whether homage or parody, it was just downright fun.

Elsman is a delight to watch as Holmes, drawing conclusions about a person’s life and change of habits from clues (such as which side of the face is more poorly shaved), as does television’s “The Mentalist.” He is totally in command at all times, striding about the stage puffing on his calabash pipe and issuing orders.

It was, then, a bit of a surprise to discover that Holmes has his Achilles heel, a crush on Irene Adler (Michele Hillen), an American opera star whose career the detective has been tracking. Hillen is lovely and conniving and is that rare person who can match wits with Holmes.

Michael RJ Campbell is a perfect Watson, Holmes’ ever-obedient sidekick and best friend, with just enough bluster and always somewhat befuddled by the things Holmes is asking him to do.

The plot, which combines two original short stories (“A Scandal in Bohemia” and “The Final Problem”) involves the King of Bohemia (Justin Munoz), about to be married but with the little matter of an affair with Ms. Adler hanging over his head. She has a photo of them that could derail his wedding plans and he enlists the help of Holmes to retrieve the photo.

Holmes’ attempts to retrieve the photo bring him into contact with the infamous Professor Moriarty (Troy Thomas) and carry the plot into areas we never expected. Thomas is deliciously malevolent, as befits one of the most famous villains in history.

Jake Murphy delivers a delightful performance as the would-be safe cracker, Sid Prince. Murphy’s performance is electric and makes him the person to watch in each of his brief scenes.

Brian Watson is James Larrabee, who marries Ms. Adler before his connections to Moriarty are uncovered.

Kristen Majetich is an energetic Madge Larrabee, who is either the maid or James’ wife. (There are so many cross-overs in amorous liaisons that it’s difficult to follow the players without a scorecard!)

The scenic design of Morgan McCarthy and Jarrod Bodensteiner (also the lighting designer) is nicely arranged so that a change of scene involves only a change in position on the stage and a change of lighting, and thus allows for a brisk progression through the story without having to wait for set changes.

Once again, Sacramento Theatre Company has given us a polished, intelligent, fast-paced production that will delight any theatergoer. And if you really want to get into the fun, try dressing to fit the period.

I need to check this one out soon.