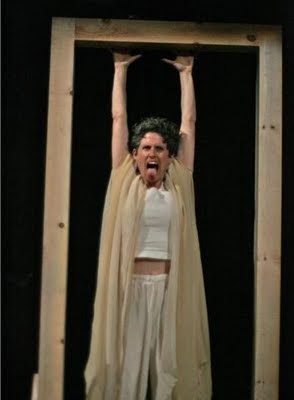 We met someone headed into the Mondavi Theater on Thursday night to see a concert. I told him we were on our way to see “The Moby Dick Variations” in the Vanderhoef Studio theater. “Good luck with that,” he said, rolling his eyes.

As I entered the theater, someone spotted me and said “I can hardly wait to read your review of this.”

Half an hour into the piece, when I was comparing it to “One Flew Over the Cuckoo’s Nest” meets “The Snake Pit,” I was wondering how I was going to handle it myself.

In an interview with the Cal Aggie earlier this week, director John Zibell described his work, saying “...it’s not a play, it’s 135 little theatrical events inspired by ‘Moby Dick.’” His comment gave me the perfect inspiration for trying to describe this piece...remarking on the “little theatrical events” that I personally took away from the evening.

As promised, this piece (I am reluctant to call it a “play”) “breaks every expectation that the audience has when they walk into the show.”

For one thing, there is no “audience” section. There are no seats (though a few small, uncomfortable wooden benches line two walls and can accommodate maybe a dozen people). There is a lengthy description of the director’s concept for this work in the program, but it is written in tiny print, in one long paragraph and there is not sufficient lighting in the theater to read it. The audience is expected to mill about and mingle with the performers throughout the two hour performance.

The program lists the twenty-two actors in the production, but there is no indication as to who is playing which role. And it probably doesn’t really matter because there is no real plot that follows any logical linear progression. (I only know that Will Klundt plays Ishmael because he is mentioned in the Aggie article. As to who played Ahab, or Queegqueg, or any other character, it doesn’t really seem to matter since most of the work didn’t really seem to be about Moby Dick anyway.)

At one point I wondered if things would be more clear if I had actually read Moby Dick at some point in my life, but I suspect that would not have helped at all.

For example, I don’t really think a lecture on basketball was written by Herman Melville. And while the scene of a young girl saying goodbye to her dying grandfather was touching, it didn’t have much to do with a white whale.

There was the feel of a frat party about it. Most of the people in the audience seemed to know all the performers and the noise level rose throughout the evening, accompanied by mostly cacophonous instruments playing music written especially for this work by Dylan Bolles and the Thingamajigs Performance Group.

I’m not sure what the girl in the pink lace dress and Superman undershorts was doing on roller skates being pulled through the crowd by someone hanging onto a rope.

Nor am I sure why the woman in the diaphanous gown was hanging from the door frame and then climbing down the outside of a staircase.

It seemed that whenever someone got hold of a microphone and began to say something you could actually understand, three other people in three other parts of the room also began to speak and you couldn’t understand anybody.

At an hour into it, I had a splitting headache, and I was counting down the last minutes of the two hours so I could escape. I hoped that maybe something worth mentioning would happen. But, no.

I finally decided that maybe I’m just too old to appreciate a show like this. Maybe avant garde theater is for the young. But I wasn’t alone. The best overheard quote of the night came from a group leaving the theater whispering to each other “We won’t say ANYTHING until we get to the car, OK?”

They were lucky they didn’t have to go home and write a review.
Posted by Bev Sykes at 11:46 PM

What an unfortunate review. It's a shame that you weren't able to enjoy this compelling piece; I, for one, found it remarkably refreshing to participate (as an audience member) in a work of theater that didn't involve a clear distinction between the performers and the audience, a structured and linear plot, and various other conventions that theater so often employs. It's your opinion, and you're certainly entitled to it- I just wish that you had gone in with an open mind. Maybe you would have- horror of horrors!- enjoyed it.

I went in with an open mind and still hated it. I think the director missed the mark on how to control his little theatrical events - chaos works for only so long, but after 45-minutes I didn't even care about what was happening anywhere in the room. The performers seemed to enjoy it though and maybe that was what is was about.