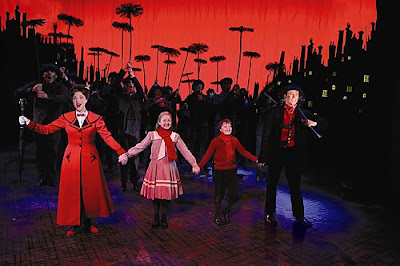 It was no ill wind that blew in with the weekend rain. It was a very friendly wind that brought the world’s best nanny, Mary Poppins, to the Sacramento Convention Center.

The stage show, directed by Richard Eyre, is not a recreation of the movie, but takes bits of the movie and merges them with bits from the book series by P.L. Travers. (I wondered how they were going to get the penguins in … and they did, though subtly.)

In truth, I went to the show as a jaded critic — ho-hum, another Disney movie transferred over to the stage. I didn’t expect to be blown away … but I was.

Our seats happened to be next to the parents of Nicolas Dromard, who plays the role of Bert, the chimney sweep, in this production. The proud stage parents cheered and whooped and talked audibly to each other throughout the production, which at first was quite annoying but then didn’t matter because he was so good, the cheering was well earned.

Dromard, who has played the role on Broadway, is quite endearing, has a more convincing British accent than Dick Van Dyke, and is so continually active on stage that he has his own dresser whose primary task is to follow him around backstage with a water bottle.

Steffanie Leigh may be new to the cast but she’s a delightful Mary Poppins, with a winning smile and ability to command the stage, whether she’s riding up a banister or sailing out over the audience under her ubiquitous umbrella.

The obstreperous Banks children, who have driven away all former nannies, are double-cast. Camille Mancuso and Tyler Merna played Jane and Michael on opening night and were wonderful. Merna in particular has a face that you find it difficult not to watch.

Playing their parents, George and Winifred, are Laird Mackintosh and Blythe Wilson. Each has his or her moment to shine. George is the staid, stuffy banker through most of the story, but when he begins to let go in the “Spoonful of Sugar” reprise, he reveals a carefree father that we never thought possible.

Winifred steps into the spotlight with “Being Mrs. Banks,” which makes her more of a “person” than we had seen up to this point.

Q. Smith grabs the stage as the evil nanny, Miss Andrew. She does justice to just about every Disney villainess with a voice that fills the Community Center and probably several nearby buildings as well.

Choreography is by co-director Matthew Bourne and is outstanding. The frenetic “Supercalifragilisticexpialidocious” is so complicated that the actors spend several hours per day during their first week of rehearsal to learn the complicated hand, foot and arm movements.

But it is “Step in Time,” the dance of the chimney sweeps, that steals the show and brings down the house, earning all those whoops and hollers from Mr. and Mrs. Dromard.

As wonderful as the acting, dancing and special effects are, it is the set that may be the biggest star in this show — and, at 11,000 pounds, I mean that literally. It’s a three-story house that opens like a child’s doll house, with a nursery that moves up to the top of the house, or down to the stage as a stand-alone scene.

In combination with some of the 250 different props, it performs surprising tricks, and when the lights dim, the mechanics behind the Disney magic is mostly invisible.

“Mary Poppins” is the winner of 25 major theater awards around the globe, including the Tony, Olivier and Evening Standard awards.

Every single one of them is well deserved.