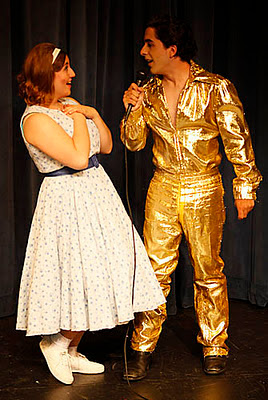 The Davis Musical Theatre Company’s production of “Bye Bye Birdie,” directed and choreographed by Jan Isaacson, has a large cast (about 40), many crossovers from the Young People’s Theater program. It has a large orchestra (15) and a full house of parents, grandparents, siblings and friends. How could it possibly be less than a hit?

This musical, with book by Michael Stewart, music by Charles Strouse and lyrics by Lee Adams, opened on Broadway in April 1960 and was a sleeper hit, shocking everyone with its success. But based on Elvis Presley’s drafting into the Army and leaving for an 18-month tour of duty in Germany, with its inevitable media circus, how could it fail?

It was Gower Champion who developed the idea of a rock and roll idol going off to the Army, setting off a ripple effect on a group of teenagers in the small town of Sweet Apple, Ohio.

While there are some outstanding scenes in this production (such as the telephone scene in Act 1 and “Kids” in Act 2), it lacked the pizzazz to make it exceptional. The problem may lie with the under-stage orchestra which, despite its large size, seemed muted and thus not always contributing to the big sound that this show requires, resulting in occasional off-key beginnings of songs.

There were also just simple dumb mistakes that a company about to celebrate its 28th season should know better — such as the placement of the black curtains that allowed the audience to see characters entering and leaving the stage and a microphone that was spotty at best.

But this should not detract from the positives of the show. Spencer Johnson is an affable, likable Albert Peterson, a mama’s boy who can’t commit to love. Albert sets off on a campaign to publicize his new song, celebrating his protege’s imminent departure for the Army and giving one last very well-publicized kiss on the “Ed Sullivan Show” to a fan chosen at random.

Johnson sings OK and, while he will never be a dancer, he was able to keep up with the others all right.

Danielle DeBow had a bit of opening-night jitters at the start of the show, as Albert’s long-suffering Latina secretary/girlfriend, Rosie Alvarez. She displayed a wonderful voice that was not always being used to its best advantage.

But as the show progressed and as her confidence grew, it was there in full force and she became a Rosie to be reckoned with, especially when being pursued by a room full of fez-wearing Shriners.

Levi Fuentes as Conrad Birdie was sabotaged by a microphone that faded in and out. His big number “Honestly Sincere,” which needed to boom out to the townspeople and the audience, just didn’t. He is better than that and I hope the mic problems are fixed in subsequent performances.

The McAfee family members are uniformly good. Taylor Hartsfield as Kim, the girl chosen to be the girl to receive Conrad’s “one last kiss,” is quite good. Scott Minor as her father Harry definitely makes a terrific impression in his “Kids,” and Danette Vassar, as Mrs. McAfee, shows once again that good things come in small packages. Watching her grow as an actress over these past years has been a delight.

Kim’s younger brother Randall McAfee (Joshua Aiden Smith) has little to do, but he does it competently.

Outstanding among the teenagers in the show are Tomas Eredia as the nerdy Harvey Johnson, whose changing voice was just perfect, and Lydia Smith as Kim’s best friend Ursula, who can scream for Conrad Birdie better than just about anybody.

Like Spencer Johnson, Noah Papagni was an affable, likable whitebread kind of boyfriend as Hugo Peabody.

Jean Henderson’s costumes were mostly perfect for the time, though I did wonder if Elvis would have worn such well pressed blue jeans with such big cuffs. Rosie’s gowns, especially for Act 2, were gorgeous.

Vasser’s dress, while not necessarily overly special, caught my eye with how perfect it was for the actress; it may have been one of my favorite outfits in the show.

This DMTC production is entertaining and will please most theatergoers.