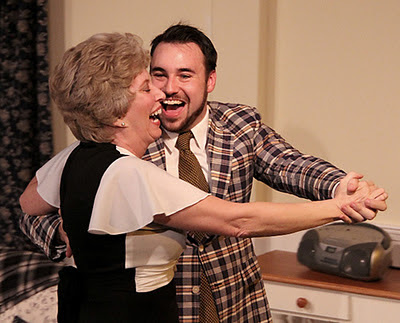 At its core, “Six Dance Lessons in Six Weeks,” currently on the Sacramento Theatre Company’s Pollock Stage, is a story about loneliness, isolation and friendship. This play, by Richard Alfieri and directed by Michele Hillen-Noufer, is both hilariously funny and painfully poignant.

The material is somewhat dated and the plot is repetitious and predictable, yet in the hands of talented actors Becky Saunders and Justin Samuel Cowan — both newcomers to STC — it turns out to be an enjoyable evening of theater.

This is the story of an older woman, Lily, who arranges for private dance lessons in her St. Petersburg Beach, Fla., condo. Enter Michael, a middle-aged ex-Broadway chorus boy with a huge chip on his shoulder. The sparks fly from the beginning. Lily is the wife of a Baptist minister; Michael can’t control his temper and uses foul language.

Each of the seven scenes in the play follows the same format — Michael arrives for the lesson, his boom box and the foot cut-outs he places on the floor to help learn the dance steps in his duffel bag. There are personality clashes resulting from some hidden secret one or the other are trying to protect, Lily threatens to end the lessons, they talk, they argue and they dance.

The scene ends with a phone call from a downstairs neighbor, Ida, who is upset about the sound of dancing feet on her ceiling.

As they work through their differences, secrets are revealed. Lily’s husband isn’t out running errands, he actually died a few years ago. Michael’s wife isn’t sick, he has no wife because he’s gay and mourning his own losses. As they work their way through the swing, the tango, the Viennese waltz and others, a grudging friendship begins to form as more secrets are shared and the loneliness that both people feel begins to dissolve.

Saunders and Cowan make these characters believable and play beautifully off each other. Lily is reserved and her Southern gentility has been forged by years of being a minister’s wife, always smiling, always gracious, keeping all of her real feelings bottled up. She has perhaps never encountered anything as open, brash and vulgar as Michael.

Michael uses anger to protect himself, suspecting homophobia in every person he meets, but he senses Lily’s vulnerability. Over the weeks, he responds to her desperate need for friendship, which early on telescopes the emotional final scene, “Bonus Lessons.”

The set for this show, designed by Mims Mattair, also a newcomer to STC, is perhaps the most memorable I have seen in the Pollock Theater. He uses the entire stage, from door to door for Lily’s condo, complete with kitchenette and a sweeping view of the ocean. It is all painted white and the brightness draws the audience into Lily’s world.

Despite its predictability, and the dated material, “Six Dance Lessons in Six Weeks” is an enjoyable production, especially in this age when “Dancing with the Stars” has brought dance into greater prominence.

I wonder what Lily and Michael would have done with the Paso Doble.