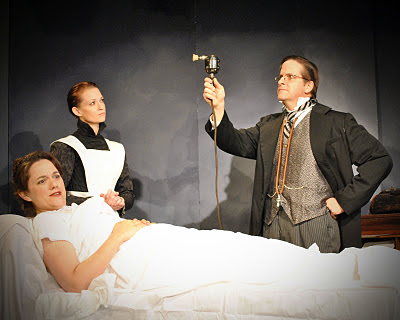 Sarah Ruhl’s comedy, directed by Peter Mohrmann, is set at “the dawn of the age of electricity, circa 1880s.”

For a little background, electromechanical vibrators were first used in medicine in 1878 to treat women for what was described as “hysteria,” a condition whose symptoms include any number of conditions with no clear physiological cause, historically treated by sexual stimulation.

“In the Next Room” features Dr. Givings (Michael Stevenson), whose practice is primarily concerned with treating sufferers of hysteria, mostly women. As he explains it, “The congestion in your womb is causing your hysterical symptoms and if we can release some of that congestion and invite the juices downward, your health will be restored.”

While Dr. Givings is producing orgasms in his office, the room next to the family living room, he is blissfully unaware that his wife Catherine (Elena Wright) is suffering her own bout of “hysteria,” brought on by depression over her inability to breastfeed their newborn child, and her husband’s inattentiveness.

Into the office come Mr. and Mrs. Daldry (Greg Alexander and Katie Rubin). Mrs. Daldry has been suffering from hysteria for some time. As Dr. Givings proceeds to give the woman her first treatment, he regales her with an amusing story about Benjamin Franklin and violent convulsions caused by electric current. “Do you feel calmer?” he asks his patient.

Stevenson, as Dr. Givings, is just so wonderfully detached from what he is doing to his patients. These treatments are all very scientific for him and he keeps that aloofness no matter what is happening on his examination table.

Wright, for her part, runs through a gamut of emotions throughout the play as she gradually reaches the depths of her frustration, and convinces her husband to try his good vibrations on her. She later shares her experience with Mrs. Daldry and with her baby’s wet nurse, Elizabeth (Victoria Alvarez-Chacon), who remarks that it sounds very much like the feelings that should happen in love-making between men and women, a concept totally foreign to the other women.

As for Rubin, was there ever a more perfect role for her? She is hilarious as she experiences her first unexpected arousal and returns again and again for more treatments.

It should be noted that while Dr. Givings has discovered the value of “paroxysms,” the concept of afterglow is completely ignored. This is definitely a slam-bam-thank you-ma’am treatment and the patients are on and off his exam table so quickly there’s hardly time to shake hands before it’s all over.

This is a fast-paced comedy with an amazing amount of dressing and undressing on stage. Costumes by Gail Russell are integral to the period of the piece and are not only beautiful (especially those lovely corsets) yet must be easy to slip on and off quickly.

Stephen C. Jones has designed a two-level set, which places Dr. Givings’ medical office a small step up from the family home, separated by a single door. The office is clinical in appearance, including the vibrating machines, while the home is filled with lush furniture, Oriental rug and one of those new electric lamps that everyone is talking about.

In the interest of full disclosure, there is brief full male frontal nudity, but it is tastefully done and integral to the story.

This is a fun comedy and everyone should drop by Capital Stage to see what all the buzz is about.

Labels: "In the Next Room", Capital Stage, Sacramento