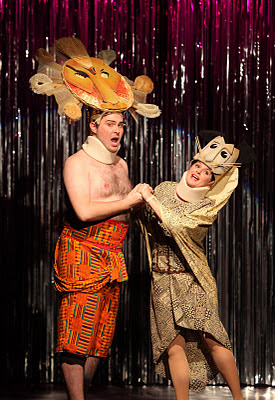 Several sacred cows were sacrificed over the weekend at the Cosmopolitan Cabaret in Sacramento, and everyone thoroughly enjoyed the spectacle.

“Forbidden Broadway,” Broadway’s longest-running musical revue, closed in New York in 2009; now, the show is on the road. Created and written by Gerard Alessandrini, “Forbidden Broadway” first opened in 1982. During its 27-year history, this marvelous revue has spoofed just about every show and star on Broadway. No star is too big, no show too revered, to become a source of delicious parody.

Over the years and many updates, the show delighted audiences with songs such as “Teeny Todd,” “Ladies Who Screech,” “Oh What a Beautiful Moron,” “C’est Misera-blah” and “La Cage Aw-full.”

The Sacramento version of the show, which runs through March 12, stars Marc Ginsburg, Jerry Lee, Jessica Reiner-Harris and Melissa WolfKlain, who sing and dance through some of the better-known “Forbidden Broadway” parodies, with the assistance of Christine Conklin’s hair, wig and makeup, Alvin Colt’s often-ingenious costumes, and the accompaniment of Graham Sobelman.

Costume changes are often so quick that you wonder what it must be like backstage. Likewise, getting out of Carol Channing makeup and into normal makeup must be remarkable to watch.

But what makes this show work so well are the performances, the impressions and the body language of these four talented actors who complete the picture. A particular favorite of mine is “Can You Feel the Pain Tonight?,” which focuses on the various injuries that come with performing in “The Lion King” that necessitate the need for a traveling chiropractor.

The costumes — which suggest Julie Taymore’s famous “Lion King” costumes — are just great, particularly that of Rafiki as he sings about “The Circle of Mice,” in homage to all the Disney shows on Broadway.

Another is the salute to “Wicked,” with a clever way of turning the skin of Elphaba (the Wicked Witch) green and still enable the actress to continue as another character a few minutes later. (Unfortunately, the use of various wigs and headpieces, along with changing makeup, as well as the quick pace of the show, often made it difficult to differentiate between Reiner-Harris and WolfKlain.)

Lee does a wonderful impression of Robert Goulet in his later years, remembering his past glories, with the sharpness of memory of Gov. Rick Perry.

Ginsburg stood out in his parodies of both “Man of La Mancha” and “Les Miserables,” and his salute to Mandy Patinkin is not to be missed.

This show has been a particular favorite of mine since we saw it in New York several years ago. I have always recommended it to anyone who is going to visit the Big Apple.

I am sad to learn that it has finally closed in New York, but glad that productions such as this one at Cosmopolitan Cabaret are allowing people across the country to see it.

If I have any complaint about this show is that with the wealth of material from which to choose, it is sad that the second act is a bit too short. But even though it leaves the audience wanting more, what it gives is a couple of hours of hearty laughter, and that’s the best thing of all.

You’re right about one thing. It is a GREAT show with standout, hilarious performers. And yet, you decided not to bother distinguishing or even ASKING which of 2 female performers was which – and therefore chose to ignore their performances completely in a theater review? When they were half of the 4-person cast and half of the show? One wonders if the reviewer would have been so lazy on the basis of ethnicity (“Well, they were both [fill in ethnicity here] so it was irrelevant to me which was which or what they did …”) We saw this show too. These two women are uniquely different performers with distinctive vocals, styles and energies, and they did uniquely different, standout solos and impressions as worthy of stellar review as the also fabulous males. Do your readers, your publication and these FOUR hard-working, dedicated and gifted performers a favor and go watch the whole show, not just the boys, and write a review worthy of all of them.