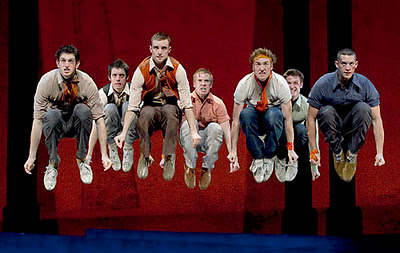 From the moment a handful of members of the Jets gang step on stage and begin to dance, it is clear that the touring Broadway production of “West Side Story,” now at the Sacramento Community Center, is going to be an exceptional experience. The energy from everyone was electric and practically crackled off the stage.

This classic American musical almost never made it to the stage. In its first version, the tensions were supposed to be between Jews and Catholics on New York’s Lower East Side during the Passover and Easter holidays, but somehow that never worked.

It wasn’t until six years later that Arthur Laurents suggested changing the conflict in this modern-day “Romeo and Juliet” from religion to race and setting it in the fire escapes and back alleys of Hell’s Kitchen, and the “West Side Story” we know today was born.

Originally directed and choreographed by Jerome Robbins, with music by Leonard Bernstein and lyrics by Stephen Sondheim, “West Side Story” opened on Broadway in 1957 and today is credited with changing the entire course of the American musical theater.

The show has been revived on Broadway several times, this latest revival opening in 2009 and became the longest-running production of “West Side Story” in Broadway history.

This is a grittier “West Side Story,” according to Laurents, who directed this revival on Broadway not long before he died. Laurents wanted to be more realistic to the city of New York itself. He felt the gangs in the original production had been too “sweet.” These gangs are more sullen. “The truth is, they’re all killers,” he was quoted as saying, adding “What I thought 50 years ago, I certainly don’t think today.”

Also, the Puerto Ricans occasionally lapse into Spanish for dialog or song (translation by Lin-Manual Miranda), which gives those characters a bit more authenticity, and reflecting more accurately the actual sound of New York.

Ross Lekites and Evy Ortiz play the star-crossed lovers, Tony and Maria. There is more sensuality in this version of the show and the two actors are beautifully suited to each other.

Lekites has an amazing voice; he can belt out lyrics at full power, and yet in his quieter moments, he gently lets the notes float out over the audience and linger for a moment before fading away.

Ortiz is a beautiful, innocent young girl who looks like she may be dressed up to celebrate her quinceañera (celebration of her 15th birthday). She has a fresh face that is open to all the wonders of her new country and eager to experience all that life has to offer. She has a voice that could be equally at home playing “Madame Butterfly.”

Michelle Aravena has the role of Anita, created in the original production by Chita Rivera. There is much of Rivera about her, in her manner and her carriage. She is a firecracker ready to explode, and explode she does, especially in “America,” that comparison of this country to Puerto Rico, and in “A Boy Like That,” as she angrily confronts Maria for her relationship with the boy who killed her brother.

This is a “big” feeling show, with massive set pieces, including the underside of a bridge that moves in over a playground, and the angular silhouettes of the fire escapes. Even the numbers that are performed on a bare stage are augmented by complicated light patterns.

“West Side Story,” like “Romeo and Juliet,” always seems a bit contrived just for the fact that everything happens in only two days, from the immediate passionate love affair between the two lovers to the tragic ultimate conclusion. Still, the raw emotion of the piece can’t help but leave you moved.

Even if you’ve seen “West Side Story” a number of times, this production is one not to be missed. It’s like seeing the show for the first time.