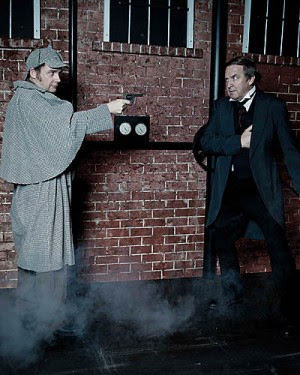 Sherlock Holmes is dead. Or so Dr. Watson announces at the beginning of “Sherlock Holmes: The Final Adventure,” now playing at the Woodland Opera House in a production directed by Bob Cooner.

The play written by William Gillette and Arthur Conan Doyle, adapted by Steven Dietz, combines two of Doyle’s short stories, “A Scandal in Bohemia” and “The Adventure of the Final Problem,” tosses in a few elements that tie the two stories together, and gets rid of the famous detective in the end.

Cooner has an all-star cast for this Holmes mash-up, starting with Simon Hunt in the title role. Hunt reminded me throughout of NCIS’ “Ducky” (David McCallum), in both appearance and mannerisms, as he rattled off volumes of relevant and irrelevant bits of trivia, or drawing conclusions about a person from the smallest detail (“A Frenchman or Russian could not have written that. It is the German who is so uncourteous to his verbs.”)

The actor had some opening-night stumbles over words and some problems with quick costume changes, but he gave us a believable Holmes, intent on his pursuit of his nemesis Moriarty (Rodger McDonald), a pursuit in which he is determined to engage, even if it leads to his own death.

As for McDonald, was there ever a more deliciously malevolent villain? A single look is enough to chill the blood and the sneer just added to the effect. McDonald looks like he is enjoying every single moment.

Scott Martin was an outstanding Dr. Watson, Holmes’ faithful sidekick who follows his friend’s instructions to the letter, no matter how strange they may be. Watson kept the action rolling, with his narration that filled in bits of Holmes’ life that had taken place offstage.

Irene Adler (Alexandra Ralph Evans) is an opera singer who has caught Holmes’ eye, though he is loath to reveal his feelings for her when he discovers she is the ex-girlfriend of the King of Bohemia (Jason Hammond). Adler is intent on blackmailing the King with a compromising photo on the eve of his wedding to another woman and the King has come to Holmes to retrieve the incriminating evidence.

Director Cooner makes an unfortunate decision in the opening scene, where Holmes is listening to a recording of Adler. The volume is much too loud and distracts terribly from the dialog of that scene.

Evans is a beautiful diva and adds a spark to all of her scenes with Holmes. Hammond brings humor to the show as the dim-witted King

Rounding out the cast are Dana Sattel as James Larrabee, who marries Adler, Patricia Glass as his sister Madge (both in cahoots with Moriarty) and Steve MacKay as “Sid Prince (and others).”

Set and lighting design are by John Bowles, who has created a beautiful library for Holmes, which takes up half of the stage, with other pieces brought in for other scenes, while the library stays in place for most scenes.

The final scene, of the waterfall that supposedly is the site of the demise of Holmes and Moriarty, is a bit of a disappointment. While the rocks leading to the waterfall are fine, the falls itself are merely represented by a dim shaft of light and no real sense of a waterfall.

Denise Miles’ costumes seem to be accurate to the period and Adler’s opera gown is beautiful.

This is not really a whodunnit nor is it exactly a comedy, though it has elements of both. What it is is a polished, intelligent, fast-paced production that will delight any theatergoer.