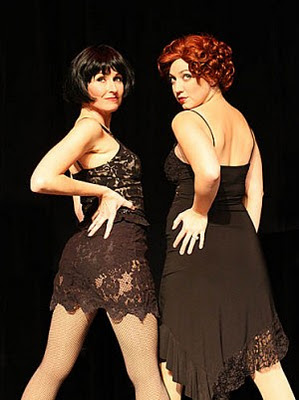 This is one of the best DMTC productions I’ve seen in a long time. It’s full of murder, greed, corruption, violence, sex, exploitation, adultery and treachery all glitzed up with so much razzle and dazzle that you’ll be cheering at the end of the first number, and consistently throughout the show.

“Chicago” points the finger at this country’s perennial fascination with bad boys (and girls) and our raising them to near cult status, as we salivate over every gory detail, the more salacious the better. Think Bonnie and Clyde, Al Capone, O.J. Simpson, the Kardashians.

This musical is based on actual events during the 1920s, when reporter Maurine Dallas Watkins reported on the trial of a young woman (Beaulah Annan, “the prettiest murderess”) who killed her boyfriend and then called her husband to tell him, as a popular fox trot record played in the background. As Beaulah sat awaiting trial, she announced that she was pregnant, prompting the headline, “Beaulah Annan Awaits Stork, Murder Trial.”

This movie was the inspiration for choreographer Bob Fosse’s collaboration with Kander and Ebb to produce “Chicago, the Musical,” which opened on Broadway in 1975, with Gwen Verdon and Chita Rivera as the two jailbirds competing for publicity for their respective crimes.

The show closed after a two-year run, unable to compete with “A Chorus Line,” but was brought back again in 1996, under the direction of Walter Bobbie with choreography by Ann Reinking (in the style of Bob Fosse). The revival won six Tony Awards, Drama Critics Circle Awards, Astaire Awards, Olivier Awards, Helpman Awards and a Grammy for best cast recording (among many other accolades).

And now we have it right in our own back yard, with a sparkling production directed by John Ewing, choreographed by Pamela Lourentzos, and featuring a stellar cast — each one as good or better as the last one.

Amber Jean Moore is outstanding as Roxie Hart, a housewife with stars in her eyes, who shoots her lover and then tries to use her crime to launch a show-biz career.

Roxie’s crime steals the headlines from Velma Kelly (Jennie Ribadeneira), a once popular singer/dancer, now also languishing in prison for shooting her multi-married lover. Her exciting “All That Jazz” was the show’s opener and set the tone nicely for the rest of the show.

Tony Ruiz is marvelous as the smooth, charming, yet slick lawyer, Billy Flynn, who knows how to work the press and, for a price, make his clients such sympathetic figures that no jury would convict them. Billy’s “All I Care About,” performed with several chorus girls armed with fans that would do credit to Sally Rand, is a knock-out.

A ventriloquist number, “We Both Reached for the Gun” — with Roxie in Billy’s lap as he literally puts words into her mouth — is outstanding.

Andrea Eve Thorpe is by no means the large matron we associate with previous actresses playing the role of Matron “Mama” Morton, but instead of heft, Thorpe achieves her dominance with strength and a cold, forbidding wardrobe and severe hair style. The effect works well for her.

Amos Hart is Roxie’s all-but-forgotten husband, played beautifully by Dan Masden. There is a lot of heart in this Hart and his “Mr. Cellophane” was very moving, as he describes what it’s like to be invisible to the people in his life.

Jacob Montoya deserves applause for his role as the Master of Ceremonies. When Montoya mixed with dancers Michael Cesar, Elio Gutierrez and Randy Noriega, it was a sight to behold.

The sob sister reporter Mary Sunshine was played to the hilt by D.A. Holmes, whose not-quite-so-surprising secret is revealed during the second act.

The DMTC orchestra, under the direction of Steve Isaacson, is on the stage, instead of under it, for this show on a set designed by John Ewing.

Costumes by Jeanne Henderson are, of course, spectacular.

Co-producer Jan Isaacson says tickets are selling fast. The Saturday evening production we attended was a near capacity audience, so get your tickets soon. Once word of mouth begins to spread, they will be in very short supply.

Just a quick correction: Velma wasn't the one with the much-married lover; she was the one who discovered her husband and sister in a compromising position ("Number 17: the spread-eagle!"). This is why her sister is "unfortunately deceased".

Great review, and I am looking forward to seeing the show tonight!

Yes, I apologize for that. My daughter, who has played in the orchestra for this show many times, pointed that out to me--but too late to change the review!