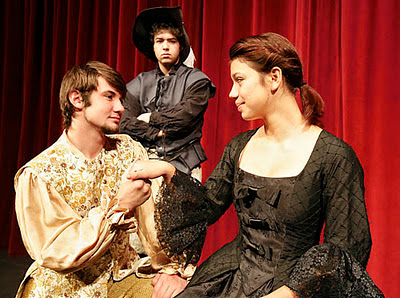 Christian (Nick Mead) woos the fair Roxane (Frances Devanbu) as
Cyrano (Antonio de Loera-Brust) looks on,
heartbroken, in the Acme Theatre Company production of "Cyrano,"
(It is unfortunate that Acme's photos appear to have all
been taken before Cyrano's nose was made!!!)

In her notes to the new Acme production of “Cyrano de Bergerac” by Edmond Rostand, director Emily Henderson writes, “This play has a lot of words.” She said a mouthful.

It is unfortunate, then, that so many of those words were unheard by the audience. A perennial problem with Acme is the inability of actors in lesser roles to speak clearly and to project, which seems such a shame since they have obviously worked so hard at learning lines and creating characters.

This is, fortunately, not a problem for the actors in the principal roles, though it does leave gaps in plot points when you can’t hear the set-up lines.

This adaptation of the Rostand classic, by Barry Kornhauser, written entirely in verse, lends itself to a lot of slapstick comedy, terrible (meaning “wonderful”) puns, and plenty of swashbuckling, all blended with great nobility and a tragic love story.

The play is fictionalized account, based on a real 17th century French writer and playwright notorious for his many duels and escapades as well as a famous nose.

Antonio de Loera-Brust, in the title role, is dashing and funny and romantic and poignant all at once, a man who can take on any man in a fight, a wit as sharp as his sword, but who is too ashamed of his physical appearance to confess his love for Roxanne. It’s a wonderful performance, deserving of the standing ovation he received at the end.

If I have any negative comment at all, it is not for the actor, but for whoever did his make-up. Please, a little more color on the tip of his nose which, in the performance, glowed white in the stage lights and is a distraction from his acting.

While Cyrano hides his love for the beautiful Roxane (Frances Devanbu), she has her sights set on Christian de Neuvilette (Nick Mead), handsome and earnest, but verbally challenged — he cannot find the words to express his feelings. He turns to his friend Cyrano, who provides the words which win Roxane’s heart and thus becomes a principal player in perhaps the most famous love triangle in literary history.

Devanbu is a lovely Roxane, as sincere in her love of Christian as she is later as she realizes the true identity of the man who won her heart so many years ago, with his beautiful words.

Mead is the perfect clueless jock, a hero among his fellow Cadets of Gascony, but unable to understand the heart of a woman. His early demise is fortunate for it certainly would have been a tremendous let-down for Roxane to realize that he never had the words of a poet.

Alex Clubb is effectively menacing as the Comte de Guiche, determined to marry Roxane and duped by the wiley Cyrano until the bride’s marriage to Christian has taken place.

Raphael Gorga is particularly noteworthy as Ragueneau, the baker. He has a knack for physical comedy and puts it to good use in this role.

Miki Benson plays several roles (as do many others in the cast) and I very much appreciated her clarity of tone without appearing forced. No matter what her role, she could always be understood and she did an excellent job in each role.

Mead was the set designer for this production, a rather utilitarian multi-level set that left lots of room for swordplay, and the fighting, choreographed by Dan Renkin, was excellent. One thing about Acme is that its young actors really have mastered swordplay, since so many of the company’s productions use it!

Costumes were designed by Henderson, with hair design by Hannah Nielson.

“Cyrano de Bergerac” is a fun evening of theater, with plenty of action to entertain younger members of the audience, and a solid story to satisfy the adults. If the actors in the minor roles could crank their volume up a bit, this really would be quite an extraordinary production.