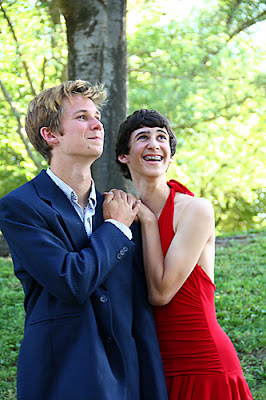 Something’s afoot at the Davis Art Center. It is Acme Theatre Company’s annual gift to the city of Davis, a free production on the center’s outdoor stage, preceded by a barbecue, giving everyone a chance to buy a burger, have a cup of strawberries with a sinfully large dollop of whipped cream, and lounge around on the grass waiting for the show to start.

This year’s production is “The Compleat Works of Wllm Shkspr (abridged)” by Jess Gorgeson, Adam Long and Daniel Singer of the Reduced Shakespeare Company, and directed by Emily Henderson, Geoffrey Albrecht and Hope Raymond.

This is a parody of all of Shakespeare’s plays, traditionally performed by only three actors, but ingeniously arranged so that nine actors can actually do the roles.

Improvisation plays an important role and it is normal for the actors to deviate from the script and have spontaneous conversations about the material with each other or the audience, giving the appearance of something that may be being made up on the spot.

After an “overture” of sorts by many instruments from tuba to kazoo, it was announced by Brian Stewart that the evening’s show would feature an all-male cast. This prompted instant outrage from the female actors in the audience, who organized a protest on the spot, pulling women out of the audience to join in a protest march and occupy the stage.

Peace was restored when the men agreed to let the women be understudies and the play got under way. Beginning with “Romeo and Juliet,” the men (Stewart, Aaron Hirst and Antonio de Loera-Brust) found ingenious ways to work their way through several plays. “Titus Andronicus” was done as a cooking show with Loera-Brust as the hand-less chef, and, recognizing that none of the three was African-American, “Othello” was presented as a rap.

All of the comedies were combined into one convoluted reading by Hirst (the justification being that they all recycle the same plot devices anyway).

When the men ran out of steam, the women “understudies” (listed in the program as “The Company” — Leah Julian, Alina Lusebrink and Hannah Nielsen) took over the stage to present all the histories as a football game, with the crown as the football. Lusebrink’s death as Julius Caesar was a sight to behold. It naturally segued into the sequel, “Anthony and Cleopatra,” where Nielsen displayed a most electric-looking wig.

“Macbeth” was reduced to a witch’s pot and a duel, but done in thick Scottish brogue.
As the first act comes to an end, the stage is littered with crumpled pages of the plays that have been done. Only two are left undone, “Coriolanus,” which they refuse to do because they feel the “–anus” part is vulgar, and “Hamlet.”

The actors are nervous about doing Shakespeare’s most difficult play and run out of the theater, leaving technician Camilla Biaggi nervously telling jokes to the audience and finally calling for intermission, to give herself time to find the missing actors.

Naturally, the actors never return and it is left to the tech crew (Biaggi, Wil Forkin and Nick Mead) to do “Hamlet,” which they do with the help of some audience participation — a couple of people pulled from the audience and the entire audience enlisted to become Ophelia’s subconscious, her ego, superego and id, all to help her produce the perfect reaction to being ordered to “get thee to a nunnery.”

When they finally finish “Hamlet,” the cast does it again, in double-time, and then backwards.

To say this show relies on slapstick is a gross understatement, but it is wonderful fun and all the action should keep even small children entertained. What better way to spend some time on your holiday weekend, than stopping by the Art Center for a hilarious show done by incredibly talented and dedicated young actors?
Posted by Bev Sykes at 6:27 PM