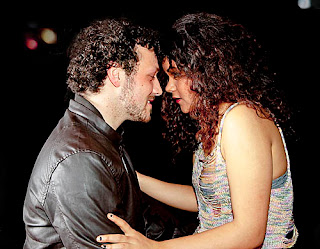 It is tragic that composer/lyricist Jonathan Larson never lived to see the phenomenon that his musical, “Rent,” has become. He died of aortic dissection caused by Marfan’s syndrome on the morning of Jan. 25, 1996; the show opened for its off-Broadway run that night.

“Rent” played to sold-out houses, and its run was extended until April 1996, when it moved to the larger Nederlander Theater; it subsequently became the eighth-longest running show in Broadway history, and grossed more than $280 million.

It won every major best musical award, including the Tony, as well as the Pulitzer Prize for drama.

Tours of “Rent” have criss-crossed the country almost continuously since late 1996. It has been translated into every major language and performed on six continents. The show had such a loyal following in New York that the term “Renthead” came to be used to describe fans who would line up for hours in advance, just to get the $20 rush tickets; they subsequently boasted of having seen the show dozens of times.

One obsessed fan claims to have seen it more than 1,100 times during its 12-year run.

Now, UC Davis’ Studio 301 has brought “Rent” to the Wyatt Pavilion, under the direction of Mitchell VanLandingham and musical direction by Elizabeth Tremaine.

This is obviously a scaled-back version of the musical, but nonetheless enthusiastic, as the performers give it their all, and the intimacy of Wyatt Pavilion helps the audience feel more a part of this group of latter-day Bohemians.

“Rent” is an updated version of Puccini’s opera, “La Boheme,” the music from which is played in brief interludes throughout the show. It tells the story of a group of impoverished young artists and musicians who struggle to survive and create in New York’s Lower East Side, under the shadow of AIDS, at a time when drugs are plentiful.

(Already that theme is dated, as with new medications AIDS is no longer a death sentence and those living with the disease no longer take AZT on strict schedules.) The characters have become a “family they chose,” young people living with life, loss and love.

There are some incredibly gorgeous songs in this show (like “I’ll Cover You,” “Santa Fe,” “Without You” and the iconic “Seasons of Love”), all of which are done beautifully by the cast. The more upbeat tunes suffer from Wyatt Pavilion’s muddy sound system and shoddy sound balance.

All dialog emanates from the same place in the center of the stage, no matter where the actor may be in the building (even when the actor is behind the audience!). The poor sound system also makes crisp diction impossible and a lot of plot points may be lost.

Kyle Lockridge plays filmmaker Mark Cohen, the central figure of the story, whose video, which he shoots throughout the action, forms the narration. Costumer designer Christine Deniz has decided to put him in a more subdued costume than the traditional brightly colored scarf and horn-rimmed glasses that have been such an integral part of the character’s identity. Lockridge’s performance, too, was a bit more subdued than one would expect from this character, though he was competent enough.

Michael Roscoe is the songwriter, Roger Davis, who falls in love with exotic dancer Mimi (Malia Abayon), a drug addict.

The heart of the show is Angel Dumott Schunard, a gay drag queen dying of AIDS. Angel was played the night I saw the show by Ulysses Morazan, substituting for Jason Phillips. One could not ask for a more affecting and moving performance than that given by Morazan, who was tender in his love scenes with Tom Collins (Marcos Sastre III) and outrageous in his dance numbers.

Sastre’s ministrations to Angel and his grief following his partner’s death were heartbreaking.

Others in the cast include Erica Kalingking as attorney Joanne Jefferson, partner to performance artist Maureen Johnson (Rachel Wagner). Ryan Geraghty is Benjamin Coffin III, who was appropriately unlikable as the landlord.

The director and cast are to be congratulated on giving a credible performance of a big Broadway musical.