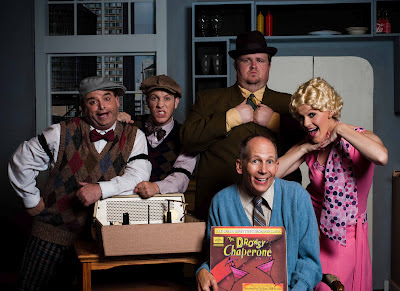 It would be difficult to find something to dislike about the Woodland Opera House’s delightful new production of “The Drowsy Chaperone.” This musical by Bob Martin and Don McKellar, which made its debut in Toronto in 1998, opened on Broadway in 2006 and won the Tony Award for best book and best score.

The WOH production, directed by Bobby Grainger, boasts a strong cast and is a gem. When the touring Broadway production of this show came to Sacramento, it was presented as a very long one-act (100 minutes), but Grainger has wisely chosen to break the action into two parts, including a “unique” Act 1 finale.

This show is an homage to musicals of the 1920s, a time before musicals had to have a hard-hitting message … or be a stage version of a beloved Disney animated film. “The Drowsy Chaperone” has no deep message, no memorable songs, no cute animals running around on stage. It’s just good, clean fun, with a lot of laughs, a lot of groans — as the lines are delivered — and a lot of madcap mayhem.

The central character, known only as “Man in Chair,” is a music lover who misses the days of old-style musicals. His voice addresses the audience in the darkened theater. “I hate theater,” the voice says. “Well, it’s so disappointing, isn’t it?” He talks about offering up a prayer before he sees a show, requesting that it be short, free of actors who roam the audience and blessed with “a story and a few good songs that will take me away.”

As the lights come up, he continues to speak to the audience throughout the show, as he pulls out one of his old records (remember records?) and plays the original cast recording of his favorite show, “The Drowsy Chaperone,” to which his mother introduced him.

As the record plays, the show comes to life on stage, turning his drab apartment into a show palace with glitzy costumes and sets that fly in, roll in or unfold. Man in Chair narrates throughout, giving the show’s history, discussing the actors playing the roles and commenting on the various musical numbers.

Stuart Eldridge is outstanding as Man in Chair. His excitement about playing his favorite record is palpable and endearing, and when he joins with the cast of the show in some of the scenes, his enthusiasm is contagious. This is Eldridge’s first show at the Opera House, and I hope it won’t be his last.

The fast-paced opening number, “Fancy Dress,” introduces the show’s many characters and lets the audience know right away that this is a plot with tongue set firmly in cheek. A big, fancy wedding has been planned and all these characters have assembled to make it happen.

The bride is a young actress, Janet Van De Graff (Cassie March), who plans to leave the stage to marry the dashing Robert Martin (Colby Salmon, who tap dances up a storm with best man George — Bradley Moates).

Janet’s producer, Feldzieg (Kyle Hadley), plans to sabotage the wedding, with the help of two gangsters disguised as pastry chefs (the delightful Colton Archey and director Grainger himself).

The gangsters represent some unseen big boss who’ll do serious damage to the producer if Janet leaves her show.

The wedding is hosted by Mrs. Tottendale (Maria Ryken). The role was originated by Georgia Engel, better known for the vapid characters she so played well on “The Mary Tyler Moore Show” and “Everybody Loves Raymond.” Ryken is every bit as endearingly dingy as I remember Engel being.

Tottendale’s “Underling” is played by Don Noxon, with whom Mrs. Tottendale has a very funny slapstick scene, which requires Man in Chair to clean up afterwards.

Elizabeth Nilsen has the role of The Drowsy Chaperone, the bride’s elegantly attired friend and confidante, who is tasked with preventing the bride and groom from seeing each other on their wedding day. She states at the outset that champagne makes her sleepy, and then proceeds to down a bottle of it — with a martini chaser — and hence becomes “the drowsy chaperone.”

Ryan Adame is the Latin lover Aldolpho, the self-proclaimed “King of Romance” (who kisses a lot), who is hired by the producer to seduce the bride, and thus thwart the marriage, but who makes one slight mistake that changes everything. Adame is hilarious with his swirling cape and his machismo.

Eimi Taormina is Trix, an aviatrix who makes an unforgettable entrance that is a show-stopper. Taormina is a bundle of energy, and it serves her well in this role.

In the end, everyone lives happily ever after and a wedding does take place, because this is an old-fashioned musical comedy and that’s the way those things end.
Posted by Bev Sykes at 12:59 PM