I Love You, You're Perfect, Now Change 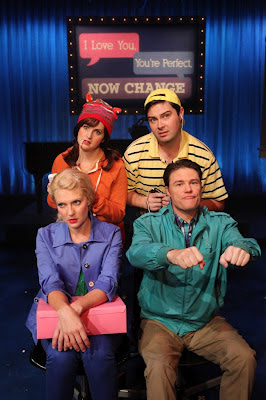 It would be difficult, if not impossible, not to find something to relate to in Sacramento’s Cosmopolitan Cabaret’s sparkling, delightful new production, “I Love You, You’re Perfect, Now Change.”

This musical, with book and lyrics by Joe DiPietro and music by Jimmy Roberts, was the second-longest running off-Broadway musical comedy (“The Fantasticks” was No. 1). It is a celebration of the mating game. Act 1 explores the journey from dating and waiting to love and marriage, while Act 2 reveals the agonies and triumphs of in-laws, newborns, trips in the family car and pickup techniques of the geriatric set.

Who can’t relate to the angst before a first date?

Will my hopes be met? Will my fear dispel?
Will I captivate? Or will I repel?
Will I show him/her just how wonderful I am?
Or will I be a date from hell?

The show, directed by Glenn Casale, stars four talented artists — Michael Dotson, last seen as a member of the barbershop quartet in Music Circus’ “The Music Man”; Jerry Lee, memorable for his performance in the Cabaret’s recent “Forbidden Broadway”; Jennifer Malenke, new to the Cosmopolitan Cabaret, but recently seen on “The Voice,” singing with Florence and the Machine; and Melissa Wolfklain, also part of the “Forbidden Broadway” cast, and recently appearing as Jan in Music Circus’ “Grease.”

These four take on more than 20 roles throughout the evening, and it would be difficult to choose the funniest from among the vignettes, though “The Marriage Tango,” with a young married couple (Lee and Wolfklain) trying to find a way to have an intimate moment without the kids interrupting would be right up there. When Wolfklain asks her hubby how he pulled off the amazing feat of getting the kids to bed on time, he admits he promised to take the little ones to Disneyland.

“I figured we’d wait a few months and tell ‘em it burned down,” Lee says.

Dotson is also very funny in “Tear Jerk” as a macho man dragged to a chick flick by his girlfriend Wolfklain.

My movie satisfaction is mindless violent action,
Some muscle men to tussle with Stallone.
A thriller that would thrill us, with Arnold or Bruce Willis,
And lots of naked shots of Sharon Stone.

… and is then embarrassed to find himself sucked into the plot of the film, and fighting not to show the tears he is crying.

Malenke and Lee are perfect nerds in “A Stud and a Babe,” wishing they were more appealing, he longing for bulging biceps and she wishing for a larger bust (“my breasts would be rounder,” “my pecs would astound her”).

At the other end of the life span is “I can live with that,” featuring a widow and a widower meeting at the funeral of a mutual friend and the dance they do around the notion of dating each other, though they still both love and miss their departed spouses. It is a less funny and more poignant moment that will touch the heart of those of us “of a certain age” who have attended too many funerals lately.

This musical premiered in 1996 and so some of the material is a bit dated, but it is nonetheless very funny and a great way to spend an evening.
Posted by Bev Sykes at 12:27 AM

Labels: cabaret, CMT, I Love You You're Perfect