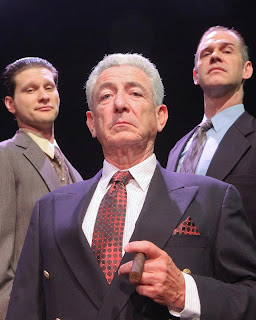 Those wacky Enron guys are back again, singing and dancing their way into your hearts.

Enron, the granddaddy of all bankruptcy cases is remembered using music, dance and video in a clever play by Lucy Prebble, directed by Stephanie Gularte at Capital Stage in Sacramento.

“I didn’t want to write a play about finance that’s boring,” said the playwright.  “Enron hired Cirque du Soleil to perform at their company parties, so I thought can we bring that flamboyance to the stage?”

And succeed they did.

Jonathan Rhys Williams has the role of a lifetime as the messianic Jeffrey Skilling, who believed he could change the world by creating a virtual economy.

“If you have an idea, if you sign a deal, say that we’re gonna provide someone with a supply of champagne for the next few years at a set price, every month or whatever—Then that definite future income can be valued, at market prices today, and written down as earnings the moment the deal is signed. We don’t have to wait for the grapes to be grown and squashed.”

Williams is mesmerizing as the man for whom the lives of the people he was ruining was merely collateral damage.  “The only difference between me and the people judging me is they weren’t smart enough to do what we did.”

For those occasions when we need to...’offload,’ we create a company that exists purely to fulfill Enron’s needs.  We could push debt, we could push those losses into this other entity, sell it to this entity so we make money and move a loss off the books, wait for it to turn a profit...This is an area where we’re expected to be creative.  The regulations encourage it.

(And keeping with the fantasy metaphors, the Board of Directors are played by giant mice.)

While Kenneth Lay may be the name one first thinks of when one thinks of the Enron scandal, in Prebble’s script, as played by Gary Martinez, Lay assumes more of a “don’t ask, don’t tell” role, preferring to step back and let his team handle things.  As long as the money keeps rolling in, he doesn’t really care how it’s being made and is more interested in redecorating the company jet and hosting lavish parties.

Shannon Maloney is the seductive Claudia Roe, screwed by Skilling (literally and figuratively) representing several women in Enron’s upper management who were the only ones to see what was going on and to work to expose the corruption within the company.

(Maloney also is listed as the choreographer and, though this is not, strictly speaking, a musical, there is definite choreography and even a chorus or two sung)

The scenic design by Stephen C. Jones, with assistance by the lighting design of Steve Decker and video designers Decker and Will Klundt is minimal, with a set piece or two rolling in here or there, but the projected videos keep the tension high and remind us of the decade in which the piece is set.

The small ensemble, particularly Lucinda Hitchcock Cone and Michael Stevenson, were excellent, partying like there was no tomorrow, until the bottom fell out and they all realized that they had lost everything.

Capitol stage has begun its second season in the new J Street location with a very strong, informative, and entertaining production.
Posted by Bev Sykes at 6:11 PM