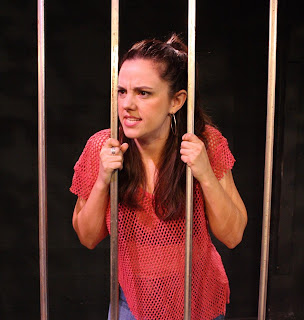 I have watched, with great pleasure, the development of Katie Rubin as a performer, since I first saw her in "The Laramie Project" at UCD back in 2004. I have watched her grow as an actor, a very funny comedienne, and a master of physical comedy.

Her talents serve her well in the hilariously funny comedy, "The North Plan" now at Capital Stage in Sacramento. The show is directed by Peter Mohrmann, who obviously has a great sense of comic timing and a flare for creating tension.

The show starts with Rubin as Tanya Shepke, in a holding cell of a small town in So. Missouri. Tanya turned herself in for driving drunk and was immediately arrested on several outstanding warrants, and she is furious because she feels she should be applauded for doing the right thing and turning herself in in the first place.

In her opening monologue, and brief verbal interactions with jail attendant Shonda Cox (Alexandra Barthel), Rubin is at her best, her body language and facial features eloquently complementing her continuing rant against the officer who arrested her.

Barthel is perfectly cast as Shonda, giving her character the personna of the stereotypical underpaid, unappreciated civil servant, bored with her job, fed up with prisoners like Tanya and completely unsympathetic to anything Tanya might have to say. Barthel takes it to the next level in Act 2, where she battles her scruples beautifully and displays her own expertise at comedy.

Into this scene comes Chief Swenson (Harry Harris) with prisoner Carlton Berg (Cassidy Brown), a political dissident arrested on orders from Homeland Security. It is Carlton’s rants which set the stage for the meat of the show.

Harris gives us an Andy Griffith kind of sheriff, a good man at heart who wants to do the right thing, but doesn't quite know what the right thing is.

The program explains that "The North Plan" refers to a secret military contingency plan titled Readiness Exercise 1984, co-authored by Oliver North and designed to test the federal government’s ability to suspend the Constitution, declare martial law, and detain large numbers of American citizens deemed to be "national security threats."

Playwright Jason Wells says that he had been thinking about "the hyperbolic political climate of recent years"and the possibility for a military coup. The play is the result of his machinations, set in a time when all civil liberties have been suspended in the name of "homeland security."

Carlton, a State Department employee, has apparently stolen "the data base of data bases," which profiles the membership of every organization the provisional government doesn’t trust. He also has the Enemies list, the names of everyone who is going to start making those whom they think are a threat to their new government disappear.

Carlton hopes to enlist either Shonda’s help or Tanya’s help to get the information out of his computer in the evidence room and get it to his friend in Houston, who apparently will know what to do with it. This is the premise of this comedy and sets off a lot of very funny situations.

Brown as Carlton is very intense. He’s a man who knows his life is at risk, who feels he can save the country and who is desperate to find someone who will help him.

The Homeland Security team of Dale Pittman (William Elsman) and Bob Lee (Andrew Perez) could not have been better cast. The very tall Elsman has a sneer that is certain to chill the soul, and Perez is a fraction of his height and very intimidated, though determined to get credit for his part of the action.

Pittman is ready (and apparently eager) to torture and kill for the new government, as long as he has official permission to do so, so he can’t be faulted for it. His zeal matches Carlton’s, but his ambition is greater.

Capitol Stage has posted an word about gun violence in the play. "While ‘The North Plan’ is not a play about guns, the use of firearms in Act Two is central to the play’s story line. When this title was selected in the spring of 2012, none of us anticipated the tragic shootings that our nation, and more recently our city, would experience." The group invites interested audience members to attend the performances on February 3, 7, and 17 to discuss the play with the artists and other audience members.
Posted by Bev Sykes at 12:05 PM