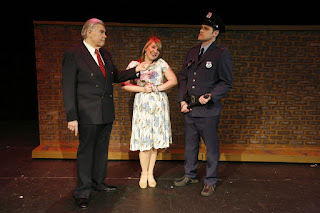 It is highly unlikely that when the Davis Musical Theatre Company was choosing its spring show for 2013, there was any reason to believe that at the same time the city of Davis would be embroiled in a discussion over water. Nor was there any reason to believe that — facing sequestration — the U.S. Department of the Interior would issue a statement threatening to lock all bathrooms in national parks if massive budget cuts take place.

But that is what is happening in the real world, while in the DMTC theater audiences are howling uproariously at Mark Hollmann’s and Greg Kotis’ musical “Urinetown,” a show that takes place in some dystopian society were water is at a premium, private bathrooms are outlawed and all citizens must pay to pee. The authors explain that this is “theater of the absurd, not absurd theater.”

Director Steve Isaacson calls it “the show with the worst title in Broadway history but one of the funniest shows.”

For a show with the worst title in Broadway history, this little musical has done well for itself. It was nominated for 10 Tony Awards, and won best book, score and direction. It also won the Drama Desk and Outer Critics Circle awards for Best Musical. It ran 965 performances at the Henry Miller Theatre, closing only because the producers were notified that the theater was being torn down.

For Isaacson, it had long been a dream to bring “Urinetown” to the Davis Musical Theatre Company ever since he first saw it on Broadway. Now his dream has become reality and the decision was an excellent one. This is a fun show from start to finish, with a strong cast who are each perfect for their roles.

Starting the show is Tev Ditter as Officer Lockstock, whose partner is Officer Barrel (Steve Mo). Ditter is square-jawed and steely eyed, someone you expect to have just walked off the pages of a Dick Tracy cartoon. Lockstock is the narrator of the show, telling the story to Little Sally. The two make fun of both the show and of musical theater.

Little Sally (Cassie March), a street kid, wise beyond her years, warns people that this is not a happy musical, but Lockstock knows that, as narrator, nothing bad can happen to him.

Private toilets have been outlawed, and now the public must pay to use the restroom. These public amenities are run by corporate giant UGC (Urine Good Company), headed by the evil Caldwell B. Cladwell (Richard Spierto).

If citizens relieve themselves in public or refuse to pay the fee, they are sent off to the dreaded Urinetown, a secret place that Lockstock promises the audience will be revealed in Act 2.

Bobby Strong (an impressive performance by Joshua Smith), is the janitor at the poorest, dirtiest facility in the worst part of town, run by Penny Pennywise. Strong decides to start a revolution after his father, Old Man Strong (Adam Sartain), is arrested for urinating in the street when he has no money to pay to use the facilities.

Pennywise is played by Andrea Eve Thorpe, showing once again the breadth of her talent, playing a harsh, cruel penny-pincher who is hiding her own secret.

This show parodies such Broadway classics as “Fiddler on the Roof,” “Les Miserables” and “West Side Story” (among others), a triumph for choreographer Pamela Lourentzos, who hits her peak with the “Cop Song” and the Act 1 finale, both of which are stunning (and hilarious).

Costume designer Jean Henderson, whose costume design is always wonderful, hits highest marks with the “Fiddler on the Roof” spoof.

(The problem with reviewing this show is that a big part of the fun are the surprises that pop up, and I don’t want to give anything away!)

Despite the title, this show is a gem with an excellent story and songs, performed beautifully by the DMTC cast under Isaacson’s direction.
Posted by Bev Sykes at 12:30 AM