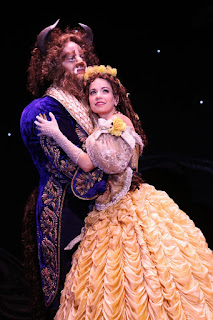 There were a lot of sleepy little princesses leaving the Sacramento Community Center Theater on opening night of “Beauty and the Beast.”  This is a sure-fire kid pleaser and, given the number of people in the audience without children in tow, it is equally enjoyable for kids of all ages.

It’s a tale as old as time:  She’s the daughter of the crazy old town inventor, ridiculed by the townsfolk for her bookishness and her dreams of finding her prince charming.  He’s a prince with a curse on his head, hiding his hideous form away in a creepy old castle, feared by the townsfolk because he’s “different.”   The two outcasts find each other, fall in love, and live happily ever after.

The touring company of the Tony award-winning “Beauty and the Beast,” directed by Rob Roth, is a big, bold, opulent production that had everyone totally captivated.  The man behind me was a big, loud laugher and I wondered if he’d ever attended a theatrical production before.

Director Roth has managed to tell the simple love story with just enough glitz to keep it moving crisply and always entertaining, but never detracting from the message of seeing truth beneath physical appearance, or discovering the redemptive power of love.

“Beauty and the Beast” was last on the CMT stage in 2000, and was the first show I reviewed, so I have a soft spot in my heart for the show.  But there have been some changes over the years.  Primarily I missed the increasingly intricate costumes of the household staff as they come closer and closer to becoming permanent pieces of household furniture. Other than Cogsworth, the clock, acquiring a wind-up key, there was no change in any of the other costumes.

I was also disappointed to note that if you didn’t know that “Babette” was supposed to be a feather duster, you would be hard pressed to figure that out, based on her costume.  But those are small complaints.

“Beauty and the Beast” is a technician’s dream, from the lavish sets by Stanley A. Meyer which flew in from above, rolled in from the wings, swivelled on turntables or just hung there looking every bit like the real thing..  And then there were the special effects--candles which ignited at a moment’s notice, sparkles, flashes, strobe lights, a headless kid who didn’t develop legs until the finale, and a transformation from Beast to Prince that would have done David Copperfield proud.

The lighting of Natalie Katz, however, was often too dark and made it difficult to see what was going on on stage. (If I didn’t know how Gaston met his end, I would not have been able to tell from what I could see on stage).  Likewise, the sound of John Petrafesa, Jr., needed serious tweaking.  Many of the conversations between Belle and the Beast were unable to be heard over the orchestra.

Hilary Maiberger is delicious as Belle, the spunky heroine, who, to save her father’s life, agrees to live in the castle of the Beast forever.  Maiberger is not only a beautiful singer, but no slouch in the dancing department either.

Darick Pead as the Beast is fierce and then endearingly tender as his love for Belle grows. His “If I can’t love her” was beautifully poignant.

Joe Hager, as the town hunk, Gaston, the muscle-bound fool who is determined to marry Belle, swaggers onto the stage like a combination of Jethro Clampet and Li’l Abner.  He’s the villain you love to hate, and as male chauvinists go, none can hold a candle to this Gaston.

His hapless foil, Maurice (Jimmy Larkin) was a delight, with a body made of rubber as he is routinely whacked about the stage by Gaston.

The supporting players are a marvelous collection of cartoonesque characters. Cogsworth (James May) the fussbudget clock and  Lumiere, the Candlestick holder (Hasan Nazari-Robati) nearly steal the show with their antics and groaners like “You’ve cut me to the wick...”  They are balanced nicely by Erin Edelle, as Mrs. Potts, the teapot, along with her son Chip (played on opening night by Gabriel L. Reis).  (There is a nice bit where Mrs. Potts carries her son on a tray across the stage.)

There are some gems in the smaller rolls, particularly Jessica Lorion as Babette, the feather duster, and Shani Hadhan as Madame de la Grande Bouche.  Taylor D. Colleton, Amanda Grace Holt and Stephanie Moskai as the three silly girls swooning for Gaston are likewise delightful.

The score by Alan Menken and lyrics by the late Howard Ashman, from a book by  Linda Woolverton, will be familiar to anyone who has seen the Disney animated feature that was the basis for this show.  There are six new songs added for the stage, with lyrics by Tim Rice, plus another song (“Human Again”) with lyrics by Ashman, which was cut from the movie.

Choreography by Matt West is a delight.  It’s not easy to design for dancing pieces of furniture, but West does well and the familiar “Be Our Guest” is a show-stopper.  Lesser known musically, “Gaston,” a drinking song with intricate moves involving beer steins, is absolutely fabulous, and perhaps my favorite number in the show.

This show will make anyone believe that miracles do happen, people can live happily ever after, and that inner beauty can tame the beast.
Posted by Bev Sykes at 6:27 PM