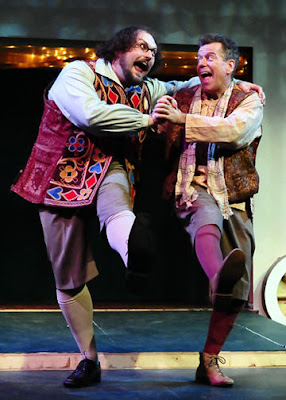 Love is in the air at the Sacramento Theatre Company, as once again the company presents one of Shakespeare’s most beloved classics, “A Midsummer Night’s Dream.”
Director Christine Nicholson has given us a more modern version, set in the early 20th century, with colorful costumes by Jessica Minnihan. Nine actors play all 23 roles, several playing three different roles, which is occasionally confusing, especially keeping the queens straight.

The play tells several stories, each of which occurs during a single summer night in and around the forest and palace of an imagined Athens, in which fairies play pranks on lovesick mortals, earnest youths endure comical romantic confusion, and a group of mechanics attempts to rehearse a play in secret.

King Thesius (Troy Thomas) and Hippolyta (Carolyn Howarth) are discussing plans for their upcoming nuptials. But plans are interrupted by the arrival of Egeus (Michael RJ Campbell), a nobleman asking for help in forcing his daughter Hermia (Melanie Marshall) to marry Demetrius (Brent Bianchini), the husband of his choosing, though she is in love with Lysander (Anthony Person).

To further complicate things, Hermia’s friend Helena (Elizabeth Holzman) is in love with Demetrius — setting the stage for all of the twists and turns that develop over the course of the story.

A group of mechanics are rehearsing in the woods, under the direction of Quince (Campbell). His four actors are Nick Bottom (Matt K. Miller), the weaver, who plays Pyramus in the troupe’s production of “Pyramus and Thisbe” to be presented later for Thesius’ wedding; Bianchini as Flute, the young man who argues against appearing as the very feminine Thisbe; Person as Starveling, a stereotypical backwoodsman who would rather whittle than perform; and Holzman as Snout, the tinker, who also plays the Wall.

The play within a play is wonderfully bad and the wall is handled beautifully with flowing garments and an interesting kind of “chink.”

This is an uneven production, but the good far outweighs the less good. In the less good category is the set by Anna Katherine Mantz. A large box sits in the middle of the stage and has no real discernible practical reason for being there, other than as a perch for Puck (Jason Oler) from time to time, and makes the rest of the stage seem crowded. It does open up to allow for action to take place inside, but it seems intrusive.
STC audience favorites Campbell and Miller raise any production a notch higher and this is no exception. Campbell is at his best as Quince, trying desperately to direct a production of “Pyramus and Thisbe” to be presented later to King Thesius (Thomas, who also plays Oberon, the king of the fairies).

Miller is Bottom, the egotistical would-be actor, who wants to play all the roles, because he knows that he can do each better than anybody else. (His instructions for how to play a lion are very funny.) When Puck turns him into a donkey, a simple cap-like piece is used rather than a full head mask, giving Titania the opportunity to have a lot of suggestive fun with the ears.

No program credit is given for incidental music, which occasionally blends nicely with the action on stage, but more often than not is intrusive and, during the intermission, downright annoying.

The fairies finally undo all the mischief they caused, and Puck offers amends to the other characters, and apologizes to the audience for anything that might have offended. This weak and idle theme was no more yielding than a dream.
Posted by Bev Sykes at 5:46 PM