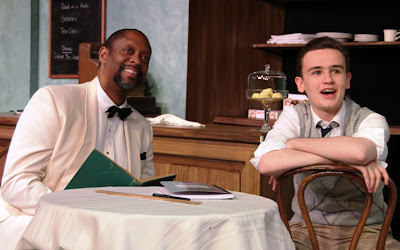 Sacramento Theater Company’s new production of Athol Fugard’s “‘Master Harold’...and the Boys” is not to be missed.  Set in a tea room in South Africa during the period of apartheid, it tells the coming of age story of a young white boy of privilege and his relationship with the two black employees at his mother’s shop.

Director Buddy Butler has a dream cast.  Will Block (Harold...or Hally) is finishing his sixth year with STC’s Young People’s Company with this production and his performance is mesmerizing.  His is a complex character, a good friend to Sam (Michael J. Asberry) and Willie (Rob Anthony Gray), but recognizes the disparity in their ranks.  Still, Sam has been both a father figure and his student throughout his growing up years and their relationship is complicated. Hally helps Sam with vocabulary, Sam teaches Hally life lessons.

Block hits all the proper nuances.  He beautifully and poignantly portrays Hally’s struggles with his feelings about his father, and his convoluted relationship with Sam.

Asberry likewise gives a sensitive and layered performance.  He brings dignity and wisdom to his menial job and finds joy in simple things, like the upcoming ballroom dance competition in which both he and Willie will be competing. He feels very protective of Hally, yet walks on eggshells some of the time, very much aware of the class distinction between the two of them. He has known the boy since he was very young and the two have reached a point where their relationship may have to change. The tenderness and humanity he displays in the earlier scenes with both Willie and Hally give way to anger and raw emotion in the play's climax. When Hally eventually strips him of any and all dignity, the man that Sam becomes is frightening and Asberry gives a gut wrenching performance.

The action takes place on a rainy afternoon in the tea room, when Hally comes home from school for his afternoon meal, which appears to be his daily habit.  Sam has been busy helping Willie with the finer points of the quick step.  Gray is perfect as the charismatic Willie, with an innocent sense of humor, but whose temper is quick, and who routinely gives his wife a “hiding.” He accepts as something that a husband must do to a wife and can’t understand why this makes her angry.  He is afraid that her last beating was so severe she won’t even compete in the dance competition.

The parental-like relationship between Sam and Hally is beautifully demonstrated when Hally recalls “the best day of his life,” when Sam made a kite for him and he was able to fly it for the first time.  His face glows with the memory, though Sam’s later recollections of that day are quite different.

The central figure in the story is Hally’s father, apparently an amputee, and and abusive alcoholic. The father has been in the hospital, but is being released early, which sends Hally over the edge, desperate to convince his mother, by telephone, that the father needs a longer recovery period and should not be brought home. You can see the fear in Hally as he contemplates how his life will change with his father home again.  Feeling powerless to stop what is about to happen, Hally takes his anger and frustration out on Sam and Willie.

Thought the play is an example of the world of apartheid, it still rings true today, in an era where we are sadly still divided in to “us” and “them” and where in moments of stress “we” can still reduce “them” to the class of “other” and thus not equal.  Sam brings such dignity to the world of the “other” and shows us the humanity that Hally forgets in his anger.