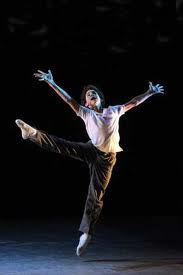 When “Billy Elliot,” the musical based on the 2000 movie, with music by Elton John, opened on Broadway, it won just about every award possible, including 10 Tonys, 10 Drama Desk awards, and 8 Outer Circle Critics Circle awards.  America took the story of a young northern England boy who just wants dance to its heart.

The show is now running at the Sacramento Community Theater and judging by the sustained cheers throughout the musical, and the standing ovation at its conclusion, Sacramento has taken the show to its heart as well.

Billy’s father wants him to be a boxer, but after an unpleasant beginning, Billy stumbles on a dance class being held in the same building.  Intrigued, he begins to mimic the girls in the ballet class and soon is one of the students himself.  His teacher realizes that he has talent and takes him under her wing with private lessons when his father forbids him to attend the class again.

The dancing in this show is amazing.  Billy was played on opening night by Mitchell Tobin, a 12 year old from Florida who has been dancing since he was 3 years old. He shares the role at other productions with Ben Cook, Drew Minard, and Noah Parets.

Tobin had a few minor fluffs in his dancing on opening night, but is simply amazing.  The Act 1 “Angry Dance” will leave you breathless. And as good as his dancing is, the kid is also a convincing actor who will bring you to tears.

Janet Dickinson is Mrs. Wilkinson, Billy’s dance teacher who discovers the talent in the boy and becomes a sort of surrogate mother to him when she learns that his own mother (Molly Garner) is dead.  Though she obviously cares for the boy, she keeps him at arms length, keeping the teacher/student relationship very strong.

Billy’s father is played by Rich Herbert, a bear of a man who is torn between his desire to make a man of his son and his son’s passion for dancing.

The character of “Dad” has been written, in this show, somewhat confusing.  In the movie, the struggle to accept Billy’s love of dancing evolves over time, when in the musical it seems instantaneous and somewhat unbelievable.

There are some sweet moments between Billy and the ghost of his mother, especially when it comes time for her to finally leave him.

Billy’s cross-dressing friend Michael was played on opening night by Sam Poon, who alternates in the role with Jake Kitchin.  Billy keeps Michael’s secret and their relationship is very sweet.

It was a little unsettling to see this show immediately following the death of Margaret Thatcher. The show goes out of its way to vilify the former Prime Minister for her attempts (ultimately successful) at breaking the miners’ union.  The opening of Act 2 is particularly mean-spirited, being held at a Christmas pageant where people wear Thatcher masks and wigs, a chorus of puppets are dressed as Thatcher, and an enormous inflated Thatcher rises out of the building.  At one point the lyrics include

Merry Christmas Maggie Thatcher
We all celebrate today
‘Cause it’s one day closer to your death.

while dancers carry around a grave marker with “Thatcher R.I.P.” on it.

In London, a vote was taken of the audience about whether this number should be left in the show for the night of her death and the vote was nearly unanimous that it should remain, with only one dissenting vote.

The show’s biggest problem is difficulty understanding lyrics and dialog, a combination of the difficult Northern England accent and terminology combined with the perennial acoustical problems of the Community Center theater.

However, that should not deter anyone from seeing this show.  I have been wanting to see “Billy Elliot” since it opened to rave reviews on Broadway...and it was well worth the wait!
Posted by Bev Sykes at 5:40 PM