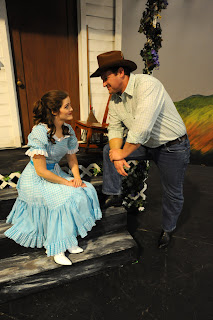 A big “Yeeow! Aye-yip-aye-yo-d-ee-ay!” to Davis Musical Theater Company for its energetic opening weekend of Rodgers and Hammerstein’s “Oklahoma!”

This show hits high marks across the board from strong direction and choreography by Jan Isaacson, a strong cast, Jean Henderson’s great costume designs (though I have to admit those cowboys had the shiniest boots I’ve ever seen!), and music direction by Chris Congdon.
“Oklahoma!,” the first musical collaboration of Rodgers and Hammerstein — who later brought the world the likes of “Carousel,” “South Pacific,” “The King and I” and “Sound of Music” — changed the face of musical theater history when it debuted in 1943, for telling an emotional story through music, lyrics and dance as had never been done before. Based on the play “Green Grow the Lilacs” by Lynn Riggs, “Oklahoma!” brought something akin to folk art to professional theater and won a Pulitzer special award and citation for music in 1944.

One dare not look too closely at the plot of this musical, for there is little there. At a time when musicals are just as likely to have a dark side as a cheery side, the story of a boy and a girl, their friends and a lunch box social is not exactly likely to provoke much psychological introspection.

The story is set in the Oklahoma territory in 1907 — the days just before statehood — and touches ever so lightly on the ongoing feud between farmers and cattlemen, though that definitely takes a back seat to the story of Curly, a cattleman, in love with Laurey, who lives on a farm with her Aunt Eller and the hired man, Jud Fry, the dark character who has his eye on Laurey, while Laurey has her eye on Curly.

Travis Nagler isn’t quite your typical pretty boy Curly, but looks every bit the catttleman and delivers solid vocals whenever he opens his mouth. His relationship with Laurey (Laura Woodruff) showed some sparks, especially in their verbal battles with one another, and they were believable in their romantic scenes.

Nagler also does his own dancing in the dream sequence with “Dream Laurey” (Kaylin Scott) and “Dream Jud” (Gabe Avila).

Woodruff was a lovely Laurey, with a beautiful soprano. I particular enjoyed her scenes of introspection, when she talks about her dreams and seems to escape into that wished-for world. It was very moving.

Mary Young reprises her 2006 performance as Aunt Eller, one of her better roles. She’s a crusty old dame, reluctant to let her softer side show, and commanding enough respect that everyone listens to her.

Outstanding was Scott Scholes, as Will Parker, in love with Ado Annie (Ashley Holm) and just returned from Kansas City, where he entered a rodeo trying to win $50 so he can marry the girl of his dreams. His “Everything’s Up to Date in Kansas City” was a real show stopper, especially with the choreography for the cowboys.

Holm is perfect as Annie, the hormonally charged young woman who just can’t say no to any man who “talks purdy” to her. In Will’s absence she decided she’s in love with the Persian peddler Ali Hakim (Avila), who eagerly returns her interest, but his own interests don’t really lead toward the altar.

Avila was fun as Hakim who is a typical traveling salesman until he finds himself in a romantic mess. He finds a clever way to extricate himself from a bad situation.

Left out of the program, but still an important character is Andrew Carnes (Michael Davis), Annie’s father who refused to permit Annie to marry Will unless Will could show some responsibility by coming up with $50 cash. For Davis, this was one to check off his bucket list, as, after a productive lifetime, he has finally appeared on stage in a musical … and has done a credible job of it too!

I always have trouble with the plot line and the character of Jud Fry (Steve Isaacson). Jud is the “bad guy,” the “outsider” whom nobody likes and who turns violent in the end. Isaacson owns this role. He brings humanity to Fry and gives the audience a glimpse of why he is the way he is. It is a beautiful and moving performance and makes me wish that Isaacson appeared on stage more often, since he is such a talented actor.

In this week, when we have once again seen the length to which “outsiders” will go when they become angry, I couldn’t help thinking of the bombers of Boston and all the other “outsiders” we have witnessed in the news in recent years.

Jud’s “outsiderness” is even more apparent when there is a more or less a sham trial following his death, in the front yard of Aunt Eller’s house, where the judge laughs and pronounces Curly not guilty of murder so the young folks can get on with their honeymoon and not bother about a more formal trial at the courthouse.

One suspects that had it been Fry who killed Curly, the response of folks would have been quite different.

However, “Oklahoma!” is not a message show, unless the message is to kick up your heels and have a good time, which the DMTC audiences certainly will have if they are fortunate enough to catch this production.
Posted by Bev Sykes at 3:48 PM