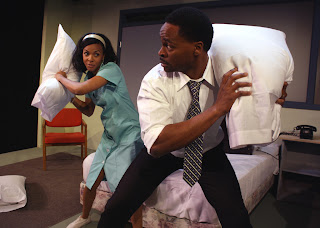 The setting is Room 306 at the Lorraine Motel in Memphis Tennessee.  The date is April 4, 1968.  There is a storm raging outside.  The Rev. Martin Luther King, Jr. has just given his “I’ve been to the mountaintop” speech in support of the Memphis sanitation workers’ strike and has returned to his motel room, exhausted, craving caffeine.  He has sent Ralph Abernathy off to get some Pall Mall cigarettes for him.

He prepares to work on his speech for the next day, which will address “Why America is going to Hell.”

Unbeknownst to King, it is his last night on earth and it’s going to be a strange evening. The play imagines the events that might have taken place the night before King’s assassination.

This is King’s own particular garden of Gethsemane, written by playwright Katori Hall (who won the Olivier Award for this play), presented by Capital Stage, and directed by the multi-talented Anthony D’Juan, making his Capital Stage directorial debut (though familiar to Capital audiences from his on-stage performances).

Beethoven Oden creates a very human King.  He’s tired.  He’s coming down with a cold.  He has smelly feet.  He smokes too much. He’s caffeine addicted.  He lies to his wife.  He’s disappointed at the turnout for his speech, afraid that his followers are tired of the fight...and he’s concerned about the continuing threats on his life and that of his family.  The threats have loomed so large that he mentioned them in his speech (“I’ve seen the Promised Land. I may not get there with you...”)  Paranoid, he obsessively paces back and forth, peeking through the curtains, checking tables, lamps, etc. for listening devices.

He calls the front desk for coffee, which is delivered by Camae (ZZ Moor), a maid at the hotel, who says she’s working her first night.  She is awed by King and is at first coyly deferential, and then, as it appears there is chemistry between them, becomes flirty. She tries to leave several times, but, encouraged by King, continues to stay, sharing a cigarette (she has Pall Malls) and prompting King to confront his life, his past, his legacy and the future of his people..

Camae is just what King needs to relax.  As she becomes more comfortable with him, she allows herself to be foul-mouthed and sassy and puts King at ease. With King’s reputation as a womanizer, it looks like this play is going in one direction, but then, as Camae’s secret becomes known, it takes a 180 degree turn and goes in a completely different direction.

Moor’s performance is spot on, with her accentuated Southern drawl.  Her performance could easily descend to the cutesy but she stays in character, not caricature.

As the play moves forward and the focus of it shifts, it loses a bit of credibility and enters more of the fantasy realm, in stark contrast to the beginning, though the finale, where King is able to see the results of his work is masterful and impressive.

The set for this production is by Capital Stage co-founder Jonathan Williams, who obviously must have spent a lot of time in seedy motels in order to create one so perfectly. (I did wonder if the hem of the bedspread, askew on one of the beds, was deliberate or accidental.)

This is a 90 minute, no intermission play, which is a good thing because to include a break in the middle would destroy the mood set throughout.

In his last speech, King said “I’m happy tonight.  I’m not worried about anything.  I’m not fearing any man.  Mine eyes have seen the glory of the coming of the Lord.”  One hopes that on his last night he really came to feel that.
Posted by Bev Sykes at 1:34 PM