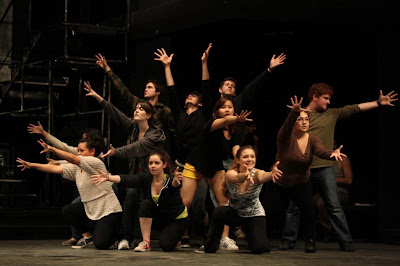 One would hardly think of the Weekly World News as a source for material to inspire a musical, but that’s exactly where Laurence O’Keefe, Keythe Farley and Brian Flemming came up with the idea for “Bat Boy: The Musical,"  now being performed on the university’s Wyatt Stage by the student-run Studio 301, directed and choreographed by Chris McCoy.

The “real” Bat Boy was, according to the Weekly World News, a creature who was half-human and half-bat captured in 1992 in a West Virginia cave by Dr. Bob Dillon of the S.O.S. (Seeker of Obscure Supernaturals). The newspaper reported on his capture, escape and recapture a few times throughout its brief history. Editor Dick Kulpa eventually admitted the story was fiction.
Studio 301 has presented a very polished production of the horror story, with a strong cast, some fun tunes (some forgettable) played by the competent six-piece off-stage orchestra under the direction of Alex Stalarow and sung by some very strong voices.

The story opens with a very realistic depiction of sibling spelunkers Ron (Johnny Wylie), Rick (Jimmy Beall) and Ruthie (Marissa Saravis) descending into a cave near the town of Hope Falls, W.Va. They are excited to possibly be the only people to have ever descended this far into the earth, and then shocked to find a creature living there. The headlamps on each of the characters, piercing the pitch black of the theater and only occasionally flashing on the creature add to the suspense.

The creature is captured, but not before biting Ruthie, who is rushed to the hospital and lays in critical condition throughout the play. The creature, whom they name Bat Boy (Marcos Sastre III) is taken to the town doctor, Dr. Parker (John Unrath), where he is placed in a cage and becomes an object of interest for Parker’s wife Meredith (Elizabeth Tremaine) and daughter Shelley (Rachel Wagner).

Meredith takes an unusual liking to the creature and insists he be called “Edgar,” while Shelley, first repulsed by him, grows to love him. The doctor comes home to find the creature in his home and intends to euthanize him but does not when his wife promises him sex if he will not do it. Parker feels this is a way to mend his broken marriage.

Unrath and Tremaine have beautiful voices. Unrath’s startles as he begins singing “Dance with me, My Darling,” and Tremaine’s emotional “A Home for You” is stunning.

Under tutelage from the family, Edgar quickly learns how to be human. He seems to be exceptionally intelligent and, thanks to BCC language tapes, speaks with an upper crust British accent.

The townsfolks, however, who sing about “Christian Charity,” are anything but Christian. It’s another case of outsider fear and they still want to “Kill the Bat Boy,” but if that can’t happen at least they can request that he not attend an upcoming revival meeting led by the Rev. Hightower (Malia Abayon).

Act 2 is the revival meeting, which Edgar insists on attending to ask the townsfolk to “Let Me Walk Among You.” (Sastre also has an excellent voice.) The meeting quickly disintegrates when Dr. Parker announces that Ruthie has died. This sets off a series of deaths and revelations about Bat Boy’s parentage and birth, better experienced than written about.

And we also find out why all the cows are dying, a parallel curse which, with the discovery of Bat Boy, everyone assumes is his doing … but really is for quite a different reason.

This is a pretty silly show, but performed beautifully by all of the actors involved.

The opening night audience was disappointingly small and I would hope that others decide to check this show out because,  for one thing where else are you going to see it? And for another silly or not, it really is a good show.