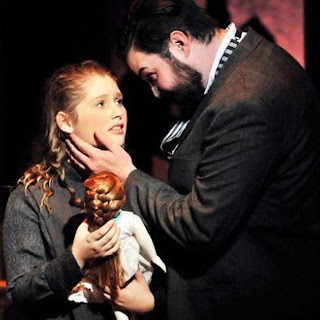 The air was filled with excitement at the Sacramento Theatre Company on Saturday night — opening night of the world premiere of a new musical, “A Little Princess,” based on the beloved book by Frances Hodgson Burnett (author of “The Secret Garden”).

The authors of the new musical — William J. Brooke (book), Eric Rockwell (music) and Margaret Rose (lyrics) — apparently have been writing this show for almost 20 years. The first draft was presented as a staged reading at the Stages Festival of New Music in Chicago. After rewrites, the show was selected by the Dramatists Guild for its New Musicals Workshop. There, it was praised by industry dignitaries and now, at last, it was having its world premiere, under the direction of Michael Laum, STC’s executive producing director.

This show has everything one could want to make it a hit. The cast is strong, the songs are alternately pleasant and stirring, the set by Kelly Tighe works well and Jessica Minnihan’s costumes are beautiful. And yet, somehow with all these strong elements, the show just never quite gelled.

We were a good third of the way into the show before there even seemed to be a plot, though thin, and, expecting all of the disparate plot elements to come together in Act 2, it was a surprise that of the seven songs in that act, the first four did not advance the plot at all, and seemed to be stand-alone pieces. One of them may even have been an homage to “Be Our Guest” from “Beauty and the Beast.”

Yet in spite of the shortcomings of the show as a whole, there were enough really good things about it to make it an enjoyable evening. Many of the roles are double-cast and Alyssa Middleton as Sara Crewe (she alternates with Lauren Metzinger) was simply outstanding. This Davis High School sophomore and member of STC’s Young Professionals’ Conservatory carries the show and does it beautifully.

Her duet with her father (Jerry Lee) is poignant, as Captain Crewe must say goodbye to his daughter at the door of the boarding school where she will live while he is off seeking a greater fortune in India.

Lee is a memorable Crewe, with a rich voice and a love for his daughter that comes through in all of his scenes with her.

This being England, the headmistress of the boarding school is a harridan of the first order, who kowtows to Sara because of her father’s wealth, but when Sara suffers a reversal of fortune, Miss Minchin (Deborah Tranelli) shows her true colors and makes “Annie’s” Miss Hannigan look almost pleasant. She takes everything away from Sara, including her name (she is called “Girl”), and sets her to scrubbing floors.
The girls in the school never really liked Sara in the first place, especially Lavinia (Abbey Williams-Campbell on opening night, sharing the role with Meghan Greene). Lavinia is tall and blond and haughty and has nothing but bad things to say (and do) to Sara, even before her fall from grace. Williams-Campbell played her with all the icy hauteur the role requires.

On the other hand, Ermengarde (Devon Hayakawa of Davis, sharing the role with Christine Miyashiro), described by some as the “school dunce,” falls in love with the stories that Sara makes up to entertain the girls, and becomes her friend and would-be protector. Hayakawa is cute as a button and very endearing as she remains Sara’s friend even when she has been reduced to the level of a maid.

Josh Powell is Tom Carrisford, Captain Crewe’s friend, who talks Crewe into investing all of his money in diamond mine speculation, both of them falling ill before the mine begins producing. Crewe dies of his illness, and Carrisford returns to England, weak and still ill, but now rich and feeling the guilt of his partner’s death. Powell is a delight, with a comedic flair, but ultimately turning serious as he takes on the responsibility for his partner’s daughter.

Others worthy of note in the cast include Tyler Wipfli as Mariette, Sara’s French maid, who inexplicably turns up after a couple of years just in time for the finale.

And unforgettable is Michael De Souza as Ram Dass, Carrisford’s servant, who serves as a narrator for the story. His strong voice and deadpan demeanor make him impossible to ignore.

Overall, I enjoyed the show, but I wish I could put my finger on what was missing to make it the great show it should have been.
Posted by Bev Sykes at 9:55 PM