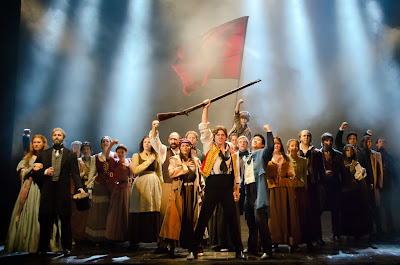 It was with that in mind that I approached  Cameron Mackintosh’s “new and improved” 25th anniversary production of Boublil & Schonberg’s “Les Misérables,” the final show of California Musical Theatre’s Broadway series at the Sacramento Community Theater.

“Les Mis” has long been one of my favorite musicals and I was skeptical of any rewrites or changes. I need not have worried. The look is new (designed by Matt Kinley); the musical orchestrations (originally by John Cameron) have been updated by Christopher Jahnke; and certain plot elements have been tweaked by James Fenton. But the story is all there and the emotional punch may be even bigger for the changes.

The new look starts at the very beginning. Traditionally, during the prologue, prisoners march around a bleak yard in a circle while singing. In the new version, they are oarsmen on a ship and the activity makes more sense than the circling.

Kinley’s vision for the set uses pieces which, while large, never overpower the action. He mixes these with projections that effectively help indicate movement throughout the streets and sewers of Paris, and the death in Act 2 is a breathtaking effect.

Peter Lockeyer heads the exemplary cast as Jean Valjean, arrested for the crime of stealing a loaf of bread to feed his sister’s dying child, and released after 19 years. A bitter man, Valjean takes his anger out on a bishop who befriends him (James Zannelli), only to have the bishop change his life. Valjean resolves to devote the rest of his life to doing good for humanity. Lockeyer has some thrilling moments, from the defiant “Who Am I?” to the poignant “Bring Him Home.” He is simply stunning.

Those who suffered through the terribly ill-cast Russell Crowe in the 2012 movie version of this musical will receive their reward in the powerful performance of Andrew Varela as Inspector Javert, relentlessly obsessed with tracking down Valjean and bringing him back to prison. Varela dominates every scene in which he appears.

Genevieve LeClerc inspires in the brief, but memorable role of Fantine, the factory worker forced into prostitution to save the life of her child. With recent memorable versions of Fantine’s “I Dreamed a Dream” by the likes of Susan Boyle and the movie’s Anne Hathaway, LeClerc still makes the song her own.

Valjean searches for Fantine’s daughter Cosette, being “cared for” by the Thernardiers, Timothy Gulan and wife Shawna M. Hamic. These two provide the comic relief for the show and play off each other nicely, deliciously grimy in Act 1 and clownish caricatures in Act 2.

Cosette and the Thernardiers’ little daughter Eponine are played by Ava Della Pietra and Erin Cearlock, who alternate in the roles. Della Pietra played Cosette on opening night, beautifully portraying the scared little girl, who has been exploited by the Thernardiers while their own daughter is pampered.

Briana Carlson-Goodman plays the grown-up Eponine, in love with Marius Pontmercy (Devin Ilaw), who considers her a friend, as he has fallen in love with Cosette (Julie Benko). Carlson-Goodman is heartbreaking as she walks the streets of Paris alone at night (“On My Own”). Ilaw impresses whenever he opens his mouth to sing. The “Heart Full of Love” trio by Marius, Cosette and Eponine is beautiful.

Enjolras, head of the rebelling students, is given a spirited performance by Jason Forbach, while Julian Silva as the spirited young Gavroche (a role he shares with Gaten Matarazzo) is a delight.

Marius’ “Empty Chairs at Empty Tables,” sung at the now deserted barricade, bemoaning the death of his friends, is a show highlight.

Backing all of these special performances is a large cast of factory workers, prostitutes, soldiers, rebels and townsfolk giving spine-tingling, rousing renditions of such songs as “One Day More” and the rousing finale, when all the spirits of the fallen unite on stage with the survivors to thunderous applause.

I suspect no fan of the show ever thought that “Les Misérables” needed a shot in the arm to improve it, but this new production brings a fresh approach that does not detract from, and rather improves on the original. It should be mentioned that this version is definitely R-rated with all the simulated sex being carried on by the prostitutes and their customers, but it is otherwise a not-to-be-missed production.
Posted by Bev Sykes at 2:20 PM