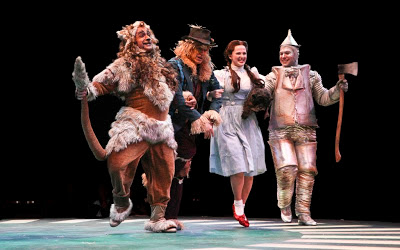 We’ve all been there at some point, in our imagination.

Somewhere over the rainbow, where there are brilliant colors, munchkins, Winkies, good and bad witches and a yellow brick road leading to the Emerald City. A place where all the dreams that you dare to dream really do come true.

Now, thanks to the first production of the Music Circus season, we can all go there, for real. Whether 7, 17 or 70 the current sparkling production will enchant everyone.

Directed by Glenn Casale, choreographed by Dana Solimando with musical direction by Jeff Rizzo, this version of the L. Frank Baum classic is a real winner.

Adapted by John Kane for the Royal Shakespeare Company in 1987 from the motion picture screenplay, “The Wizard of Oz” will be familiar to anyone who has ever seen the 1939 MGM musical, as the dialog and music follow closely (with some minor adjustments) the music and lyrics by Harold Arlen and E.Y. ("Yip") Harburg.

In the 2003 version of this production, Music Circus paid homage to the original film by making the opening scenes black and white. All costumes were shades of grey or white, set pieces were grey. The only color on stage were the flesh tones of the actors Even the crullers which Auntie Em offered to the farm hands and the hot dog Dorothy’s dog Toto removed from the roasting stick of the traveling huckster, Professor Marvel, were grey. In this production, only Dorothy, her uncle and aunt are dressed in grey, while everyone else, the set, and that hot dog is are muted colors. It’s a design choice that makes no sense.

However, from the time Dorothy lands in Oz, her house flattening the Wicked Witch of the East, until she clicks her ruby slippered heels together and wishes herself back home again, all colors are vibrant and varied and all set pieces are bright and sparkling.

Making her Music Circus debit, Emily Walton is a winsome Dorothy, full of innocence and wonder. She doesn’t try to be Judy Garland, but she so comfortably inhabits the ruby slippers, she doesn’t have to.

Walton’s uncle, Jim Walton, plays the dual roles of the farmhand Hunk in Kansas and the Scarecrow in Oz. He and Emily work well together, and while he doesn’t quite have the boneless quality of Ray Bolger or even 2004′s John Bisom, still he makes a credible scarecrow and best friend to Dorothy.

Shannon Stoeke is Hickory the farmhand and also Oz’s Tin Man. He clanks his way effectively around the stage and is at his most endearing when he learns that the heart for which he has so long hoped is capable of breaking.
Farmhand Zeke and Cowardly Lion are played by Jamie Torcellini. He is perhaps the member of the cast who most does an imitation of the movie, and I must say that his Bert Lahr impression is wonderful, though Torcellini still adds enough of himself to make the role his own.

The best member of this little group of folks off to find the wizard sadly gets no program credit at all, other than a photo. Nigel the dog was perhaps the best Toto I have ever seen. Trained by Bill Berloni, this dog is so well-behaved on stage there were times I wondered if he were a stuffed animal, until he raised an ear or looked around at the audience or up at Dorothy.

When Heather Lee, as Glinda (she also plays Auntie Em) begins to sing to the Munchkins, if you had your eyes closed you might think you were hearing Billie Burke, the original Glinda.

Jacquelyn Piro Donovan scores high marks for her bicycle riding down the Music Circus ramp and onto the stage, and for frightening lots of children in the audience as the Wicked Witch of the West. I did miss the green skin-tone, so identified with the witch, though.

Bill Nolte is a bumbling old curmudgeon as Professor Marvel and later the Wizard of Oz himself.

Others in lesser roles were no less outstanding, such as Doug Carfrae as Uncle Henry and the Winkie General, Zonya Love as the Munchin coroner, tiny John B. Williford as the Mayor of Munchkin city, and Andrew Wilson as Nikko, the Commander of the Monkeys.

The principals are rounded out by a delicious assortment of Munchkins (members of the CMT junior company) trees, poppies, Ozians, optimistic voices and Winkies. There is also a troupe of eight Jitterbugs listed in the program for a number, cut from the original movie and cut, at the last minute, from this production as well.

Kudos to the technical crew who make bicycles, monkeys and broomsticks that fly, balloons that float into the stratosphere, a witch that melts into the floor, an overpowering wizard, a first-rate tornado, eye-blindingly speedy costume changes and a myriad scenery changes, all of which came off without noticeable hitch, the members of the crew were the unsung heroes of the night.

From start to finish this is a wonderful production, which, fortunately is having an extended run at the Wells Fargo Pavilion. Act quickly to get tickets now. Your children or grandchildren will love it — and so will you.
Posted by Bev Sykes at 5:29 PM