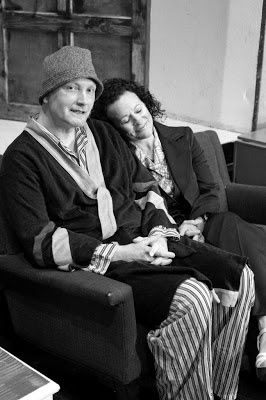 “Tribute” by Bernard Slade — perhaps better known for the play “Same Time Next Year” and his work in television productions such as “Bewitched,” “The Flying Nun” and “The Partridge Family” — is rarely performed, and it’s a shame. It’s a gem of a play, nicely balancing comedy with tragedy and leaving the audience feeling both good and sad at the end.
Director Dean Shellenberger has brought this play to the Woodland Opera House, and what a gift he has given to theatergoers of this area.

“Tribute” is a seven-person play that rises or falls on the character of Scottie Templeton, a man who is the person Murray of “A Thousand Clowns” would be if he were in his 50s. He has squandered his life and has ruined two marriages. He’s a Broadway press agent who can make anyone like him, but is so happy-go-lucky, he can’t take anything seriously.
But, we like Scottie for the same reason his friends like him — he’s totally charming, he loves life and he refuses to think of the negative. If the actor isn’t believably charming, the play would fall on its face.

Actor Bob Cooner is delightful, charming, lovable and frustrating all at once. Along with his ex-wife Maggie (Julie Bock) and best friend Lou (Walt Thompson), we roll our eyes at yet another dumb mistake Scottie has made.

The play begins at a tribute for Scottie, held in a theater because what other place would be large enough to hold all of his friends? Scottie, you see, was diagnosed with end-stage leukemia. The doctor (Georgann Wallace) says he has just a few months to live. The play follows his acceptance of the diagnosis and his attempt to establish a relationship with his adult son, Jud (Brent Randolph) with whom he has never been able to bond.

Randolph is suitably uptight and self-absorbed, a young man filled with anger who somehow — as the play progresses — begins to break down the walls he has been hiding behind for all of his life.

Maggie is the heart of the play, with her continuing love for Scottie (though apparently she is happily re-married), taking care of him as she would a child, with the overtones of a satisfactory sex life behind them.
Lou is the continuing thread through the play, who hosts the tribute and always seems to turn up when Scottie needs his friend. Walt Thompson is as likeable as Lou as Cooner is as Scottie.

Other characters who fill out the play include Leasa Talmadge as Salley, Scottie’s latest female acquaintance, whom he tries to set up with Jud, feeling the young man needs a woman in his life. Talmadge wears the most beautiful red costume of the play, designed by Denise Miles.

Jen Smuda-Cotter is Hilary, an ex-hooker and longtime friend of Scottie.

Wallace is that rare creature — a doctor who makes house calls. She is a gruff doctor, whose affection for Scottie can’t be denied and who desperately tries to get him to agree to take the treatment that could prolong his life.

Set design is by John Bowles, a two-level apartment big enough to hold a grand piano. The one thing I love about Woodland sets is they are all so solid. When someone slams a door in this play (which happens often), there isn’t a single tremor through the rest of the set … it’s as solid as your own house. The “tribute” portion of the play takes place in front of a curtain that is lowered in front of the apartment set.

This is a play with lots of chuckles throughout, though the audience is never far from thinking about the meaning of life and how one makes one’s mark in the world.

The Opera House was less than half full on opening night, which I felt was terribly sad because this is a good play and the performances are outstanding. I hope more people will turn out to see it during the remainder of its run.
Posted by Bev Sykes at 5:58 PM