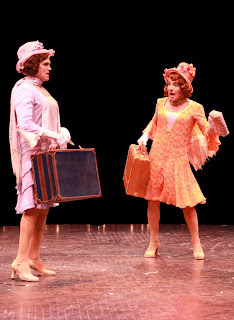 “Some Like It Hot” is an iconic Billy Wilder movie, released in 1959, which appears on many top 10 movies lists. Images of Marilyn Monroe with Tony Curtis and Jack Lemmon in drag are familiar to any movie buff.

“Sugar,” now at Music Circus, is the musical version of the classic movie, with book by Peter Stone, music by Jule Styne and lyrics by Bob Merrill. It is fairly faithful to the original movie, though the songs never made it into popular sing-a-long lists.

Those familiar with the movie will find no surprises in the musical version, which sticks pretty closely to the film’s plot. Out of work musicians, Joe (Brent Barrett in the Tony Curtis part) and Jerry (Jason Graae in the Jack Lemmon role) just happen to witness a mob shooting in a local garage and barely escape with their lives from the mob boss Spats Palazzo (Brad Bradley).

Needing to get out of Chicago, they dress as women and join an all-girl’s band, Sweet Sue and her Society Syncopators, who are headed for Florida and who just happen to need a saxophone and a bass.

Barrett and Graae don’t do impressions of Curtis and Lemon, though there is no question about who is who, as both are quite reminiscent of the original actors. Barrett is quite the lothario with a beautiful voice, while Graae is the comic fall guy of the duo and is very funny trying to live in the world of women without revealing his own gender.

Mobster Bradley is one of the high points of this musical, tap dancing his way into your heart, despite the fact that his sole role is to kill the two musicians. He has what may be one of the funniest death scenes I’ve ever seen.
The lead singer for the Syncopators is Sugar Kane (Elizabeth Stanley), who may not exude the raw innocent sexuality of Marilyn Monroe, but who is very good in her role. Her character seems more of a calculated gold digger than Monroe did in the movie. She has a history of falling for deadbeat sax players, which doesn’t look good for deadbeat sax player Joe.

The only dark part of this play is Sugar’s obvious alcoholism, which seems gratuitous. It is never really discussed or resolved, or really any part of the plot, so one wonders why it is included in an otherwise bright and fun musical.

Things become complicated once the band reaches Florida and Joe poses as a millionaire in order to woo Sugar, while Jerry is being pursued by a real millionaire, Osgood Fielding Jr. (Lenny Wolpe). Fielding is terrific, making no attempt whatsoever to recreate the performance of Joe E. Brown, who played the role in the movie. He is an older, some what sexually dim-witted man who knows what he wants and won’t let anything get in his way, even the gender of his intended. Fielding’s performance was a real highlight. His “Naughty Old Men Need Naughty Young Girls” was very funny.

Other noteworthy performances are turned in by Alix Korey, the brash Sweet Sue, who is the leader of the band, and Ray DeMattis as Bienstock, the band manager.

There are lots of jokes, verbal and visual, about men living in such close proximity of so many beautiful girls. Even the brutality of the mobsters is softened by some wonderful tapdance numbers, particular “Tear the Town Apart.”
This is an enjoyable show, which fans of the original movie will love and those unfamiliar with the movie will also enjoy.
Posted by Bev Sykes at 10:52 PM