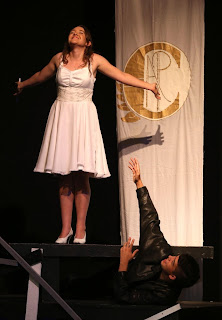 Those talented actors at Acme Theatre Company are tackling a Herculean task — they are putting on not one, but two simultaneous productions of Shakespeare’s “Romeo and Juliet.”

One version has the regular mixed-gender cast, the other is an all-female version. As if that weren’t daunting enough, of the 43 actors, 20 are new to Acme, an always interesting situation, as the newcomers haven’t learned all the ropes yet.

I asked director Emily Henderson why she decided on such an ambitious project. She explained that the seeds were planted when she played Juliet in an all-female production at Wellesley College. Reading about UC Davis’ all-female/all-male/randomly mixed production when she was in high school was also part of the decision.

When auditions were held, she still hadn’t decided what kind of production it was to be. And given the number of strong actors, the decision to do two productions was made.

The productions are set in some dystopian time period where the House of Escalus rules with an iron fist, determined to bring peace to Verona and keep the warring houses of Capulet and Montague from disturbing that peace. The doors to the Brunelle Performance Hall are guarded by armed soldiers, who place a band around the wrist of each member of the audience. We are warned that the band must be worn at all times.

We are then directed to the stage of the theater, where chairs have been set up. The 500-seat Brunelle theater is so large it was felt that the intimacy of the play would be lost and so the audience becomes spectators on the streets of Verona.

I saw the all-female cast on Friday and the “regular” (for lack of a better word) cast on Saturday, and was glad that I had “committed myself to four hours of Shakespearean tragedy,” as Henderson put it. The feel of each production was unique and quite different from the other one.

As with all Acme shows for 30 years, the entire production suffers from actors who have not yet learned to project, and so while the actors who were good — were very, very good — there were also parts of each show that were impossible to hear.

The prologue, for example, in the all-female cast was so muddled that I couldn’t understand a word and so had little idea what was going on with the cast members on stage. Surely it would be better with the next cast, but no. I still have no idea what was said or what was going on, though it was a dramatic moment for the director and lighting designer Arina Ushakova, it was mostly lost on at least myself and my husband.

Callie Miller and Margaret Starbuck play the star-crossed lovers in the female production and one could not ask for better. Miller was lovely and innocent, falling in love for the first time. Starbuck as the young man who falls in love at first sight was a delight to watch as he experienced the feelings that come with that love. The balcony scene was a real high point and made one realize how very special it is when age-appropriate actors play these roles.

Miki Benson was an endearing Mercutio, Julia Smart Truco was outstanding as Benvolio, as was Eliza Buchanan as Juliet’s cousin Tybalt. Special kudos to Kashmir Kravitz as Friar Lawrence, whose dedication to the role was so great she even got a man’s haircut. Meili Monk gave a solid performance as Juliet’s nurse. Deanna Gee, in the small role of the servant Sampson, was very funny.

The alternate cast production was much more testosterone-driven. While Henderson approached the two casts with identical stage directions, she was surprised to discover that the cast dynamic resulted in quite different shows.

“With two casts, I built in entirely different directions,” she said. “The creativity that I thought has been coming from my head is truly coming from the energetic relationship between me and the actor.”

Eden Tomich and Antonio De Loera-Brust are the title characters in this production. Tomich is a strong-willed Juliet, determined to follow her heart’s desire. DeLoera-Brust is an athletic Romeo with a quick temper and a love for his Juliet, which is palpably aching. The death scene for both was heartbreaking.

Cole Yambrovich’s Mercutio was as fiery as his red hair, Matthew Karoly gave a warm performance as Romeo’s loyal friend Benvolio, and Katy Zaragoza-Smith did well with the complicated emotions of Juliet’s nurse, a wonderful comedienne, yet able to plumb the depths of her feelings of sadness as the losses begin to mount.

Daniel Tutt was a commanding and icy-cold Lord Capulet, banishing Juliet from his house if she refuses to marry Count Paris (Aaron Hirst).

I would be hard-pressed to say which of the two productions I enjoyed more. There is enough difference in the two casts that my recommendation would really be to see both and make up your own mind.

Special recognition needs to go to Dan Renkin, a loyal Acme alum, who once again flew in from New York to direct the fight choreography.
Posted by Bev Sykes at 5:01 PM