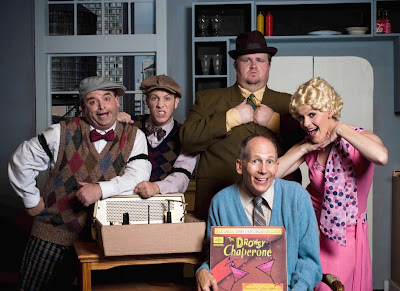 More than 450 Elly nominees for the 2012-13 season were announced at an informal nomination reception on Sunday, Aug. 11. Actors, directors, technicians and producers were on hand to listen excitedly for their names to be called.

This past season, 272 shows were submitted by 82 theaters (up from last year’s  244 shows by 78 theaters). Fifty-eight theaters and 123 productions received nominations, with the Woodland Opera House garnering the second largest number of awards (29) and the Davis Musical Theatre Company receiving a very respectable 14.
Woodland Opera House’s John Bowles received four nominations — three for set design (“Peter Pan,” “Stuart Little” and “Goodnight Moon”) and one for lighting design for “Goodnight Moon.” Elisha Machado was nominated for Supporting Actor, Adult for “Goodnight Moon,” and Eric Alley received a nomination in the same category for “Pinkalicious.” Nancy Agee picked up a nomination as Supporting Actress, Adult for “Pinkalicious.”

But the bulk of Woodland’s nominations went to “Peter Pan” (10, including one for Overall Production) and “The Drowsy Chaperone” (nine).

James Glica-Hernandez, nominated for his musical direction for “Peter Pan” was delighted.

“You don’t expect to have that response,” he said, admitting he was still dazed by it all. “I’m so proud of ‘Peter Pan.’ We had a great team and a great cast.”

He was particularly happy to see Emily Jo Seminoff, nominated for her role as Peter Pan (and also as Supporting Actress in “Hairspray” with DMTC). “She takes her participation so seriously and works so hard. She is very professional and she has such joy in it. I love that.”

Rodger McDonald, nominated for his dual roles as Mr. Darling and Captain Hook in “Peter Pan,” was happy to work with Seminoff, who also just won Woodland’s annual Chesley Award for “Peter Pan.”

“Emily Jo is very good and worked hard at it,” McDonald said, and then commented on his own nomination. “That role is such a juicy role. You have to be half an imbecile not to get laughs. I really enjoyed doing it.”

Emily O’Flaherty picked up a nomination in the Best Actress, Child for her role as Wendy Darling in “Peter Pan,” a nomination that particularly pleased Glica-Hernandez.

“Emily started with me as a private vocal student about three years ago,” he said. “She was a timid little girl, and now here she is with an Elly nomination. Unreal. I’m the old proud grandpa.”

“Angela had never done lighting in her life before. I don’t think she had ever been on a ladder in her life. It’s all part of my evil plan,” he said with a laugh.

Bobby Grainger picked up a nomination as director for “The Drowsy Chaperone,” one of nine nods for that show.
“We had really great cast,” he said “It’s just a fun show to do. The whole team is really excited.”

Grainger, who had appeared in the show last year with a theater company that is no longer in existence, was tapped by Kean to direct Woodland’s production and brought several of that cast across the causeway with him.
“Some people have this crazy notion the causeway is 75 miles long. It’s really only a 35-minute drive. We arranged car pools,” he said.

“I go for best talent and best chemistry. My goal is to put on the best show that will sell the most tickets. I want the audience to have a good time and to smile. I’m very much sophomoric, and I love slapstick. I have a good time.”

The goal must have worked because by the end of its run, “The Drowsy Chaperone” — which also won a nomination for Overall Production — was playing to sold-out houses.

Colby Salmon and Stuart Eldridge received nominations in the leading actor category. Eldridge played “Man in the Chair,” the only character in the show without a name.

“Stuart is a tremendously talented man,” Grainger said. “He and I had lengthy conversations about why he said his lines, who he was, and why he was sitting in the chair. I wanted to give him a name and an identity.”

Jason Hammond received three nominations for DMTC’s sparkling production of the Elly-nominated “Hairspray” (direction, choreography and sound design), though he says “I really had my hand in almost every cookie jar at that time,” including set design and design of the 35 wigs used in the show.

“I loved it so much. We had that kind of positive energy where you get creative and have synergy with other people.”

Hammond, too, was pleased with Seminoff’s nomination in the supporting actress category as the “bad girl” in “Hairspray.”

“I’ve worked with her a couple of times and to see her growth, especially in the past couple of years, has been wonderful,” he said. “She’s doing incredible work, and is a great lady, too.”

“Hairspray” also received other nominations for Denise Miles (costume design), Steve Isaacson (lighting design), Christine Deamer (set design), Andy Hyun (supporting actor) and Danielle Hansen-Penny (supporting actress).
Tevye Ditter, nominated as leading actor in “Urinetown,” says it is one of his favorite shows. He played the role in 2012 for Runaway Stage and was pleased to have another opportunity for DMTC.

“It has a lot of very smart comedy in it, and paid homage to a lot of other shows and genres,” Ditter said. “It makes fun of itself and is very self-aware.”

Named for the late Eleanor McClatchy, a devoted patron of the arts and former publisher of the Sacramento Bee, the Elly Awards celebrate excellence and the outstanding achievements of community theaters and artists in the greater Sacramento area. Created 31 years ago by local community actors, the Elly Awards have grown from a Sacramento tradition to now include theaters within a 70-miles radius.